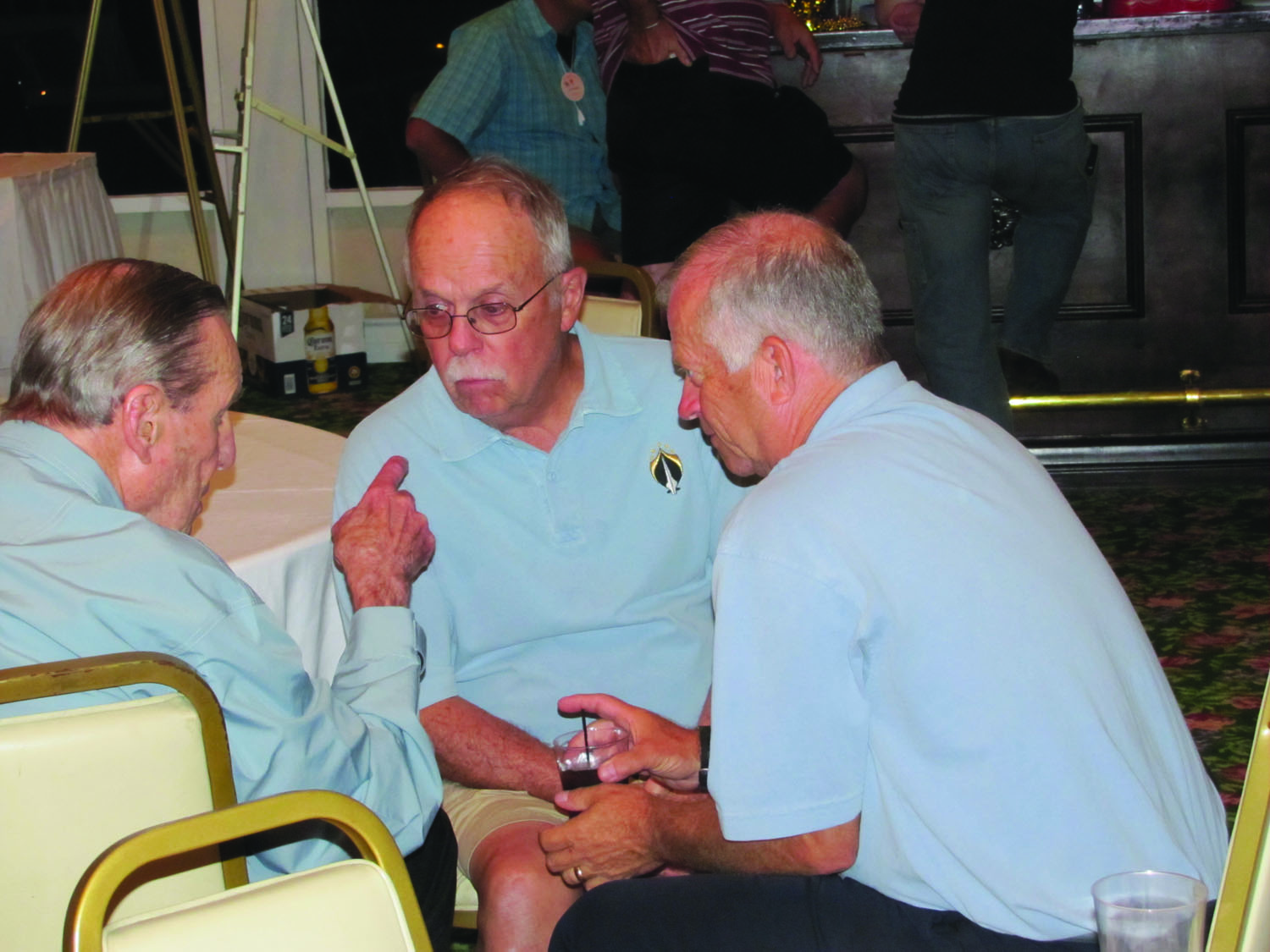 Did you hear about the P-51 pilot who made ace on the same mission he was shot down—by two Mustangs? Or the P-47 pilot who flew a combat mission with a duck? Or the deployed Hellcat ace who received a summons from the Army to report for duty or face possible prison time?

If not, you’re reading the right magazine because Flight Journal has the debriefs on those and many other missions.

In September the American Fighter Aces Association (AFAA) held its annual reunion in San Diego. Of some 130 U.S. aces known living (of perhaps 1,400 from all of wars), 22 were registered to attend the event, and 20 turned up. It’s a fast-diminishing elite: the young pups of Korean War vintage like AFAA president Chick Cleveland are in their 80s while the median age is 90.

Aerial combat today is nonexistent, and has been since late in the last century. Large-scale air warfare, as defined by jet age standards, involves perhaps 10 shootdowns in one day, and the last time Americans did that was 1972. The last time any air force shot down 30 aircraft in a day was 1945.

Prospects for adding new aces at this point in history rate between minimal and absolute zero. But that doesn’t mean that members of their dwindling ranks lack for “there-I-was” stories. And they do not all involve yanking and banking, hosing enemy airframes in the wild blue yonder.

In fact, some work the other way.

Retired Brigadier General Frank Gailer was barely a 21-year-old first lieutenant with three previous victories when he bagged two Fw 190s near Magdeburg, Germany, on November 27, 1944. Then he saw two fighters approaching head-on. He put his gyro sight on one, preparing to shoot, when he realized they were P-51s. He held his fire but the other Mustangs did not. They shot off Gailer’s canopy, put several rounds into his engine, and forced him to abandon ship. (Happily, he had attended a bailout lecture the day before.) In San Diego he recalled, “I saw two blue-nosed Mustangs fly over the top of me.”

The expectant father spent the rest of the war behind barbed wire. Years later, he asked some former 352nd Group pilots if any of them remembered a red and yellow-nosed ’51 appearing in their gunsights. None of the former Bodney residents could say as they did.

In December 1943, a Pacific Theater fighter pilot established a record likely to remain forever—flying a combat mission with a duck.  Lieutenant Ralph Wandrey was a 23-year-old ace flying with the 49th Fighter Group in New Guinea where he was keeper of the 9th Squadron mascot. The Muscovy (Cairina moschata) was named after the popular 1940 song “Huckleberry Duck.”

The group was moving from Dobodura to Gusap, and Wandrey was one of three pilots flying newly acquired P-47s with the CO, Major Jerry Johnson. Ralph had wrapped Huckleberry in a sheet and placed him on the cockpit floor, presumably safely out of the way. However, upon arrival, the Thunderbolts encountered bandits strafing the field, and dived to engage. But Huckleberry, though a much experienced flier, had never been in a negative-G environment. He floated up off the cockpit floor and, momentarily viewing Ralph nose to beak, he emitted one plaintive “Quack.” That did it. Ralph said he was useless for several seconds thereafter.

However, Lt. Wandrey recovered his composure enough to avoid being shot down. The attackers were dispersed and the Jugs landed.

But before alighting at Gusap, Ralph discerned that in the excitement Huckleberry had fouled his sheet, which had to be discarded.  More urgently, the Iowan counted 26 holes in his Jug’s tough hide, all aft of the cockpit. Ralph takes a professional view of the episode, saying “They didn’t lead me enough!”

Finally, this war story comes from my Texas “cousin,” Tilman E. Pool. In 1942, at age 18, he applied for the Army cadet program but learned it could take 18 months to reach the training pipeline. He checked with the Navy, which said six weeks, so “Tilly” never returned to take the Army oath. He received his Wings of Gold at age 19 and seldom gave the Army another thought.

Time passed. Then, in early 1945, Ensign Pool received a notice on official U.S. Army stationery demanding that he appear to be sworn in Or else. By then he was flying Hellcats off USS Hornet (CV-12) so he replied on official U.S. Navy stationery, informing the Army recruiters that he was otherwise engaged, having received a better offer.

The VF-17 ace confides, “You know, I never heard another word from the Army.”

Next year’s aces reunion will be held at the Seattle Museum of Flight, so drop by Boeing Field and listen in. Maybe you’ll hear some comparable stories—but you’ll have to listen pretty dang hard to match these!