“We’d fly over the target, level, and the target would go under the wing. We’d be slowing down, and slowing down, pull up, and just do a wing over. Slightly beyond the target, pull over, and then come straight down. We had a gun sight, but [we’d] just line the target up on the seam of the cowling. We’d drop on straight down and pull out, and either hit the deck or pop up again and come back and strafe, depending on the opposition. Sometimes, if there was any gunfire, which I didn’t see much of, I’d stamp the rudder a little bit, left, right. You’d skid. Don’t keep the ball in the center was my tactic. They’d shoot to the right, and I’m going to the left.”

Unsung Heroes of the South Pacific Campaign
The 3rd Air Commando Group (ACG) was activated on May 1, 1944. Its training focused on a unique mission: to establish and maintain airfields behind enemy lines, provide for its own supply and defense, and attack the enemy’s rear areas and fly air support for allied infantry. The 3rd and 4th Fighter Squadrons were assigned to the group, along with liaison and troop carrier squadrons. Moving to the South Pacific in late 1944, the group was stationed at Leyte in December 1944, Mangaldan, Luzon in January 1945, Laoag, Luzon in April 1945, and Ie Shima in August 1945. Originally conceived as a more powerful version of the 1st ACG that fought in Burma, the 3rd ACG soon discovered that Japanese tactics and the Philippine terrain were not conducive to commando operations. Instead of assault-from-the-sky operations dropping commandos behind enemy lines, the group quickly adapted to a more conventional type of war. This involved the Mustangs attacking the Japanese wherever they could be found, the Grasshopper liaison planes flying observation missions and personnel evacuations, and the C-47s hauling cargo. 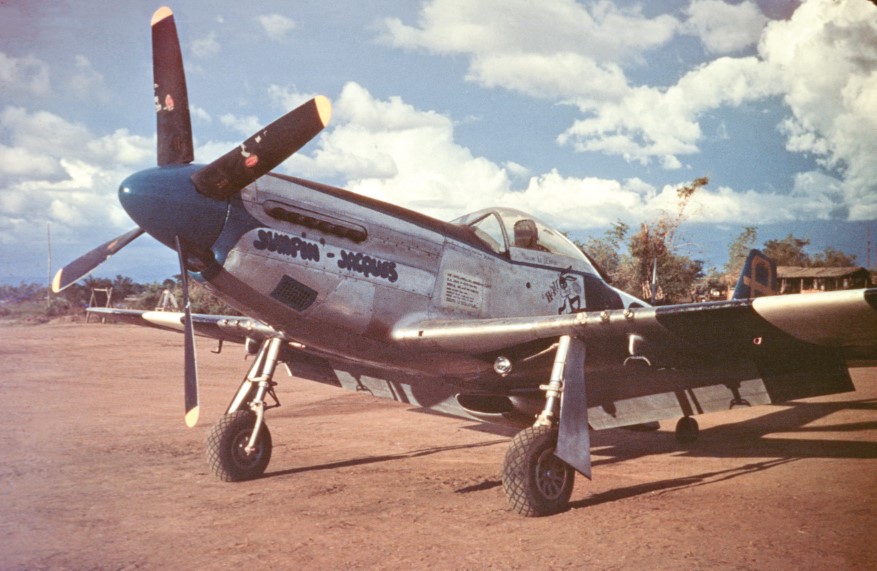 Although the fighter pilots didn’t see much enemy air activity, seven of them did score one aerial victory each while with the group. Included in this list is Major Walker M. “Bud” Mahurin, of 56th FG fame, who also commanded the 3rd ACG. (After being shot down over France in March 1944, he was forbidden from flying further combat in Europe to protect the identity of the Resistance fighters.)

Lt. Jacques Edward Young was a Mustang pilot assigned to the 3rd Fighter Squadron, 3rd ACG, 5th Air Force, U.S. Army Air Forces. Lt. Young’s son, Mr. Kurt Young, spoke to the author about his dad’s experiences in the war. Young flew 101 combat missions in the Pacific between January 15 and September 1, 1945 (98 in Mustangs plus another 3 in P-40Ns). By the time he got there in 1944, if a Zero saw a Mustang, it would rapidly leave the area. A unique entry in Young’s logbook is on June 4, 1945, when he was “Co-pilot with Maj Mahurin” in a B-25. When asked about this flight, Young said, “We had a B-25 in the group. He thought I had B-25 time. I thought he had time. We didn’t have any time, it turned out, but brought it back.”

Primarily serving in the air-to-ground role, then, the Air Commando Mustang pilots were known for their innovation. In one instance, Mahurin led a 16-ship formation over the airfield, breaking into the landing pattern with minimal spacing. This allowed the entire group to get on the ground in less than three minutes. Due to the Pacific’s narrow airfields and increasingly heavy traffic, this technique soon became standard practice. After moving to Mangaldan, a dirt airfield in Luzon, the fighter pilots conducted fourship takeoff in order to quickly get their formation airborne and rendezvous. This was important for two reasons: Mangaldan was one of the busiest airfields in the Pacific, and, as Jacques Young put it, “We had lots of short missions” from there because the front lines were so close, often within 30 minutes’ flying time.

The fighter pilots of the Air Commandos would also go to the front lines to coordinate with the infantry. In one instance, with dug-in Japanese positions on the reverse side of some over-grown hills and friendly troops only 250 yards from the Japanese, the pilots convinced the ground commanders they could safely attack the enemy without having to pull back the friendly troops. Briefing the pilots back at the squadron, they plastered the Japanese forces so effectively that the commander said they took the position “practically standing up.” Major General W. H. Gill, commander of the 32nd Infantry, wrote that “we were forced to ask that air strikes be made within fifty to one hundred yards ahead of the infantry … these strikes were, to my mind, perfection itself.”
After taking Laoag airfield (150 miles behind enemy lines) in April 1945, the Air Commandos were supplied by air for over a month. The group’s advance echelon moved to Ie Shima on August 9th—the same day that a B-29 named “Bockscar” dropped the second atomic bomb on Nagasaki. With the end of the war, the group moved to Atsugi, Japan, until the fighter squadrons were deactivated in February 1946. 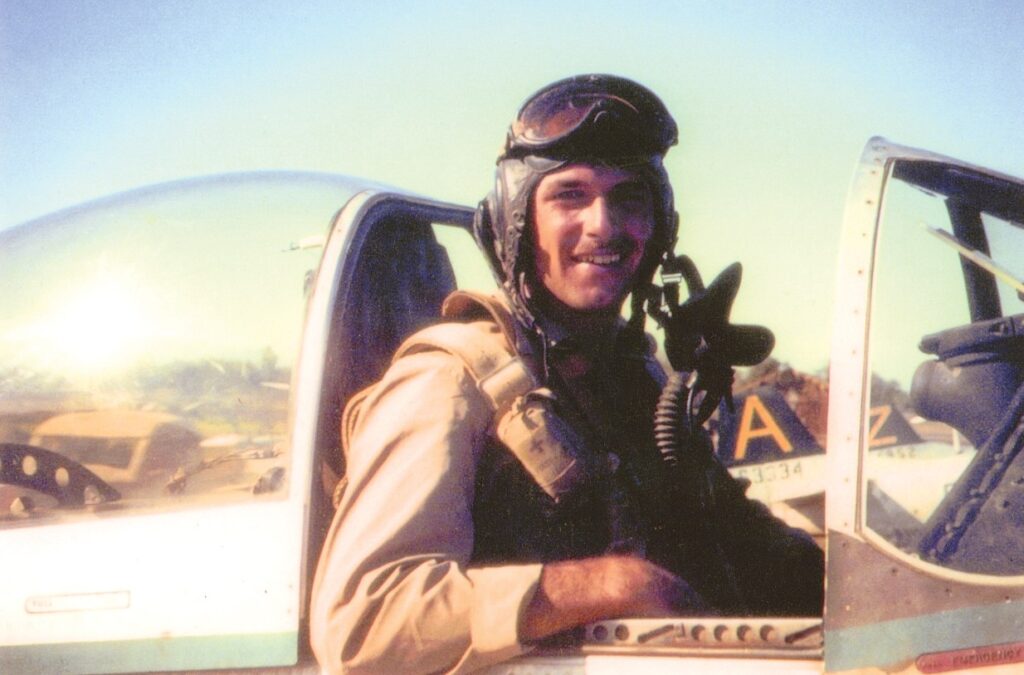 Lt. Jacques Young in the cockpit of “Jumpin’ Jacques,” Laoag Airfield, Luzon, Philippines, April 1945. Note the Mustangs in the background with tail letters “A” and “Z.” (Robert Renner via Kurt Young)

Lt. Jacques E. Young & “Jumpin’ Jacques”
Lt. Jacques Young was studying at Purdue in 1943, while he was also enrolled in the Army ROTC program. When he was called up, he had already flown around 10 hours in the Piper Cub. He went to flight school in the Stearman PT-17 (soloing on October 20, 1943), the Vultee BT-13 “Vibrator” and the North American AT-6 Texan. His son Kurt says one of his father’s early flights in the BT-13 was interesting. During this flight, his instructor told him to fly back to the field and land, which he did—although he had not been instructed how to land the aircraft! Lt. Young graduated with class 44-D in Douglas, Georgia.

From there, he went to the Pacific, ferrying P-40s from New Guinea to the front lines. Kurt says his dad’s constant complaint about the P-40 was its poor radios. Having grown tired of ferrying P-40s, one day Young asked his commander if he could join the group that some newly arrived P-51Ds were being delivered to. The commander agreed, and there is a story that in late October, 1944, eight young lieutenants of the 3rd ACG went to New Guinea to pick up some brand new P-51Ds—an aircraft none of them had flown!

“Jumpin’ Jacques” airborne on a combat mission loaded with bombs. The new pilots of the 3rd Fighter Squadron had Greek letters assigned to their aircraft; Young had Omega on the tail of his Mustang. Also note the Pacific Theater stripes on the fuselage and wings of the thoroughbred. (Photo courtesy of Robert Renner via Kurt Young)

The 3rd ACG’s Mustangs carried the Pacific Theater markings, which resemble the more familiar D-Day stripes but are much wider and consist of only three bands (a black-white-black stripe that runs around the aft fuselage and both wings) rather than five. For group markings, the crew painted the top half of the vertical stabilizer blue, and each aircraft had a unique letter painted in yellow on the tail, from A through Z. When they ran out of English letters, the new pilots were assigned letters of the Greek alphabet. Young was the 10th new pilot, so he got Omega. Young’s assigned Mustang was dubbed “Jumpin’ Jacques” and was adorned with Bugs Bunny on the side. The Bugs Bunny was his crew chief’s idea, since he always had one on his aircraft. “Jumpin’ Jacques” was so named because he liked to “jump” other pilots from their 6 o’clock. Young was tall enough to easily turn around in the cockpit to check his six directly so his aircraft never had a mirror installed on the canopy. There are some interesting entries in Young’s logbook. For instance, his combat missions ranged in flying time between 50 minutes and 6 hours. The 6-hour hops were flights to Formosa, including a mission on February 16, 1945, where he remarked “Train sweep on Formosa. Destroyed one locomotive (assist).” Shortly after, on February 27, he flew a 1.5 hour combat sortie, dropping bombs and strafing Japanese positions in Baguio, then a couple of weeks later dive-bombing and strafing west of Clark Field. His entry on August 15, 1945, says “No More Shooting,” signifying the end of the war. Lt. Young was at Atsugi by September 20, 1945, continuing to fly “Jumpin’ Jacques” until their last flight together on January 16, 1946. By then, Young had accumulated 765 hours 25 minutes total flying time, with 522 hours 50 minutes in fighters.

Interestingly, Young’s father, Ferris Young, was a balloon pilot in World War I in France. Although their family originated from Germany, Ferris gave his son a French name when he was born in 1923. Post World War II, Jacques Young went back to college, graduating with the first aeronautical engineering class from Purdue in 1949. He also continued to fly fighters with the Ohio Air National Guard, flying P-51Ds and Hs and later F-84s. His unit was activated during the Berlin Crisis in 1961. Jacques accumulated about 6,500 hours in single-engine aircraft, with zero engine failures or flame-outs, and later became a Colonel in the Civil Air Patrol. He retired as an Air Force civilian from Wright-Patterson AFB, Ohio. The National Museum of the U.S. Air Force has on display a Japanese electrically heated flight suit and a silk parachute that Jacques brought back from Japan. He also flew the F-84 that’s in the AF Museum, and he was also the last pilot to fly the F-84 on static display at the Air National Guard base at Springfield, Ohio.
Many black and white photos exist from the war, mainly because black and white film was easily developed. Jacques Young’s father, Ferris, sent him Kodachrome color film, and Young took pictures, mailing the film home to be developed. The color photos of “Jumpin’ Jacques” are, therefore, unique. 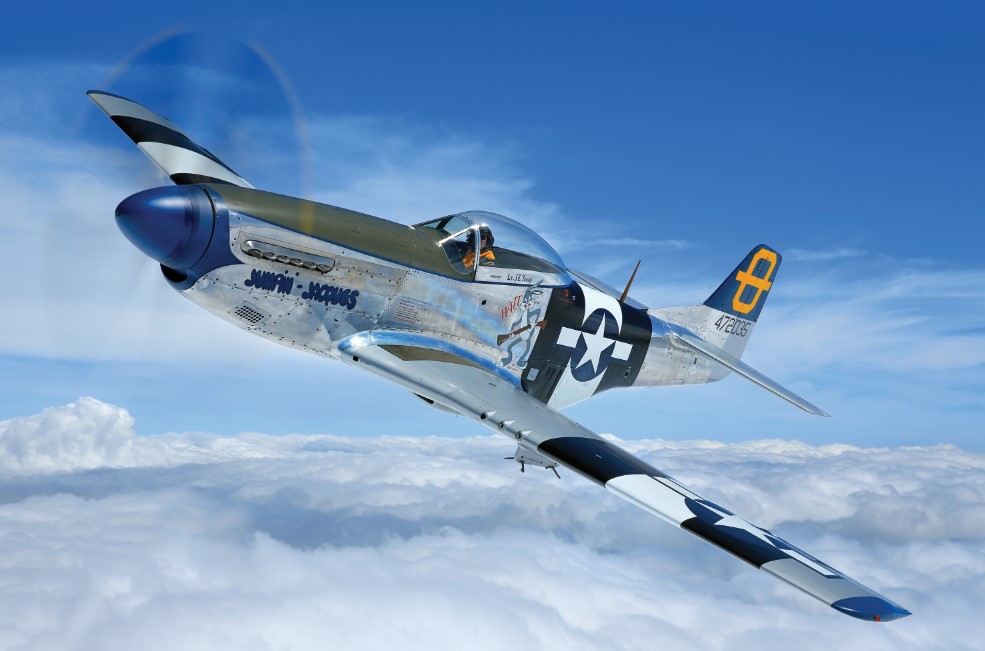 Peter Teichman pulls in close to the cameraship in his Mustang, painted as “Jumpin’ Jacques.” Teichman’s Mustang, his first acquisition for the North Weald, England-based Hangar 11 Collection, is unique as it is one of only a few Mustangs with combat history. It still carries the field repairs from battle scars she received while flying with the 332nd Fighter Group. (Photo by John Dibbs/facebook.com/theplanepicture)