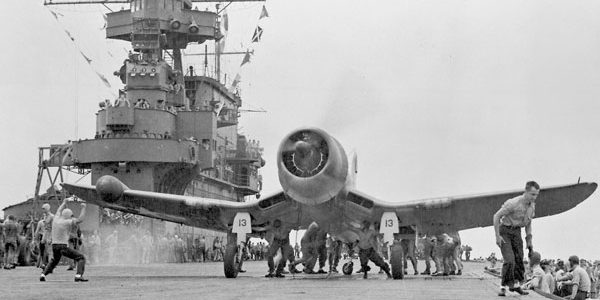 Frank Lang and the rare F4U-2
Hunched in the cockpit of an F4U-2 Corsair in the darkest, blackest night he could remember, Second Lieutenant Frank Lang peered at the 6-inch scope in the center of his instrument panel and saw nothing significant to break up the green-yellow line inscribing a circle around the dial.

He wondered if he would surprise himself by becoming airsick. He continued his letdown. Hidden in blackness below was the air station at Cherry Point, North Carolina (also known as Cunningham Field), and 9,000 feet of pavement on Runway 32L. Moments earlier, Lang had heard a transmission from the ground controller: “One of our guys is down.” Someone else came up on VHF and asked, “Anybody know what happened to Lieutenant Gilfillan?” Lang had to change frequencies and heard nothing more about the other pilot as he descended through the night. 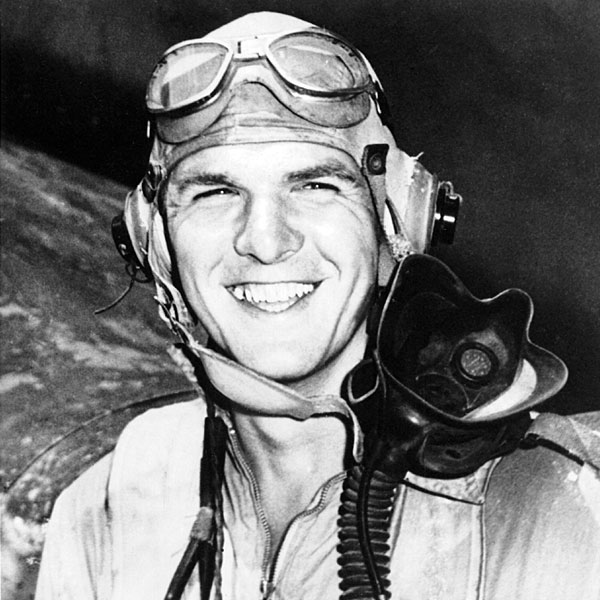 Frank Lang’s career took him from second lieutenant (shown here) to major general, and from the F4U-2 Corsair to the F-4B Phantom II. Lang was in the first cohort of Marines to fly the F4U-2 night fighter. (Photo courtesy of the Robert F. Dorr collection)

Cool in the cockpit
On happier days, Frank Lang enjoyed telling friends that he’d cheated, in manner of speaking. Long before he climbed into the cockpit of the unique F4U-2 Corsair night fighter — the version of the gull-winged fighter that served in the smallest numbers and is least known — Lang had more hours in his logbook than most Marines and most of the men he would confront in combat.

Born in 1918 in New Rochelle, New York, Lang worked for United Aircraft before the United States entered the war. “I had my private pilot’s license while I was working for Chance Vought, a division of United, the maker of the Corsair,” said Lang. “Getting into the Corsair as a Marine pilot, especially the little-known F4U-2 version, was the fulfillment of a dream.”

In fact, “little known” is putting it generously. The F4U-2 was almost completely unknown, even during the war. It was the first Corsair equipped with radar and Americans were only beginning to learn what that meant.

“Before the war, when night arrived, you put your planes in the hangar,” said Lang. “The invention of radar changed all that.”

The term “radar” was initially an abbreviation (what would be called an acronym today) for “radio detection and ranging.” In 1922, A. Hoyt Taylor and Leo C. Young at the Navy’s Aircraft Radio Laboratory in Washington, D.C., were experimenting with radio transmissions between their station and a receiver located across the Anacostia River. During the test, a passing river steamer interrupted their signal. This suggested that radio waves might be used to detect the passage of a ship at night or in fog.

Just after Pearl Harbor, the Naval Aircraft Factory in Philadelphia, began fitting 34 birdcage-cockpit F4U-1 Corsairs with an APS-4 radar using an 18-inch parabolic antenna, inside a housing on the leading edge of the right wing of each aircraft. The cockpit radarscope, 6 inches around, was located in the center of the instrument panel with the gyro horizon, altimeter, directional gyro and needle ball all clustered around the scope. “The panel was arranged so that at all times you could scan your attitude and altitude indicators,” Lang said. “That was much needed when flying blind.” Because of the radar pod, the planes’ armament was reduced from six wing .50-caliber machine guns to five. Lang’s Marine squadron received 18 of the newly redesignated F4U-2s and the Navy got the rest. The Navy used them to equip its night-fighter squadrons, VF (N)-75 and VF (N)-76. The F4U-2 was the first U.S. single-engine fighter to be equipped specifically for night-fighter duties.

Because the Navy designation system prescribed an “N” suffix for a night fighter, the F4U-2 should have been designated F4U-2N — but it wasn’t.

Lang and the F4U-2 evolved simultaneously. Like nearly all Marines who became aviators early in the war, Lang started by enlisting in the Navy, in Boston. He went to Pensacola, Florida, for flight training. “That was a piece of cake for me because I was already working on a commercial pilot’s rating by then,” Lang said. “I came out of flight school and went directly into night fighters at Cherry Point. Our first commander at VMF (N)-532 was Major Ross Mickey. And in spite of my piloting experience, it took me several sorties to get used to the F4U-2 and to flying at night.

“The cockpit of the F4U-2 Corsair was very roomy. I’m a big guy and I had lots of room in the cockpit. I had no difficulty whatever reaching the levers and buttons. The legroom was just fantastic in the Corsair. They had a hole in the bottom of the fuselage with a piece of Plexiglas there that you could look through. We had one gent in our squadron, First Lieutenant Don Fenton, who just made it into the service because he was five-foot-four-and-a-half, something like that, and he had to use a pillow in order to fly the Corsair.

“Of course, the Corsair had that long nose and the birdcage canopy, so visibility could have been better, especially when taxiing on the ground. They improved visibility later with a different canopy shape but we only got one of the bubble canopies in my squadron.

“It was a difficult aircraft to taxi. Overseas, we had a crew chief lie on the wing beside us and communicate with hand signals to help us taxi. Otherwise, you had to turn left, right, left, right, constantly to make sure there was nothing in front of you.

“While we were training in the F4U-2 at Cherry Point on October 19, 1943, I was making an overhead run on a flight of SBD Dauntlesses when one of the SBDs hit my airplane. It was quite an impact. There was a heavy, clunking sound when we collided. I suffered pretty severe damage to my right wing and lost my radome. Fortunately, both the SBD and I managed to land safely.

“Not everything about the F4U-2 was what you’d expect. Believe it or not, having that fat radar installation out on the right wing actually improved the performance of the Corsair, so that the F4U-2 was in some ways easier to fly than the early F4U-1. The radome improved the stall characteristics considerably. There was a noteworthy improvement in left roll performance over the standard F4U-1.”