The image captured here is exceptional for more reasons than one. The aircraft is a Curtiss SC-1 Seahawk, seldom seen in action with such clarity. Look closely at the picture: The floatplane fighter is barely lifting off the catapult yet remains crisply in focus. The photographer, the father of Flight Journal reader David Kovacic, did a superb job of tracking a fast, suddenly moving subject.

The ship was the cruiser USS Macon (CA-132) conducting Atlantic Fleet training exercises in April 1947. The 13,000-ton warship was still new; she had been commissioned two weeks before V-J Day in 1945. Her aviation department typically operated two floatplanes.

The Seahawk was designed as a hybrid: a cruiser and battleship-launched naval gunfire spotter capable of moderate fighter performance. With two .50 calibers and a
270-knot top speed from its 1,300hp Wright R1820, it was capable of defending itself against enemy aircraft.

First flown in early 1944, the Seahawk entered fleet service late that year. Including seven prototypes and preproduction aircraft, 577 SC-1s were delivered, in contrast to the older Vought OS2U Kingfisher, with some 1,500 produced.

Seahawks were delivered on wheels for ease of operation ashore, with floats attached before embarking in ships. Though SCs went to sea in October 1944, their combat debut occurred off Borneo in June 1945. Under-wing racks accepted a pair of 250-pound bombs or 325-pound depth charges, and a wing-mounted surface-search radar was optional.

Only the single-seat “dash one” model was produced, although a developmental SC-2 was considered with a second cockpit.

Seahawk production ended in October 1946, with ever-declining numbers in service thereafter. The last known examples were retired in 1949. By then, helicopters were increasingly common in the fleet, capable of performing reconnaissance, spotting, and especially rescue missions. Recovery was via a towed sled that the pilot “taxied” up on and the aircraft’s center float was snagged. The sled was then reeled closer to the ship, where the bird was craned back onboard. 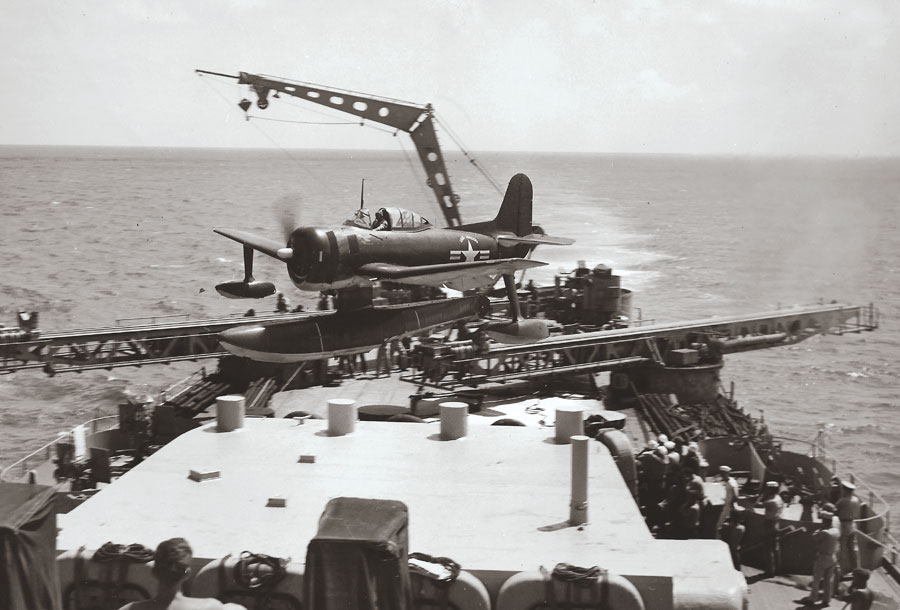 The Curtiss SC-1 Seahawk was America’s only floatplane with fighter performance, although it apparently never engaged in aerial combat. (Photo courtesy of David Kovacic)