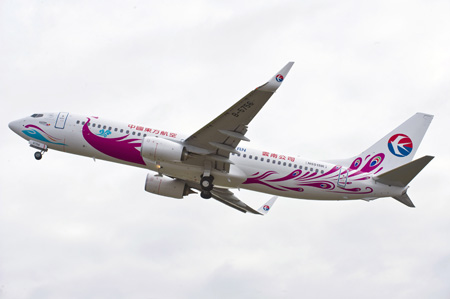 China Eastern Airlines received the 1,000th Boeing airplane made for its namesake country yesterday in a delivery in Seattle. The jet, a 737-800 with the Boeing Sky Interior painted in special peacock livery, will join China Eastern Yunnan Airlines. China Eastern currently operates the largest 737 fleet among Chinese airlines.

Boeing, which calls China one of the world’s most dynamic markets for commercial airplanes, forecasts the country will need 5,260 new airplanes, valued at $670 billion, in the next 20 years.

“We take great pride in the partnership that Boeing and China have shared for more than 40 years. Boeing greatly values China as both a customer and a supplier partner,” said Boeing Commercial Airplanes President and CEO Ray Conner. “This delivery symbolizes the tremendous accomplishments we have achieved together along with the significant trust and confidence that Chinese airlines have placed in Boeing’s products and services. Boeing is committed to advancing our partnership with China for decades to come.”

Boeing airplanes comprise the majority of commercial jetliners operated in China, providing service to more than 20 different Chinese airlines. Chinese suppliers contribute parts and components to every current Boeing commercial airplane model, including 737, 747, 767, 777 and 787. Today, more than 7,000 Boeing airplanes operating throughout the world use major parts and assemblies from China.

“We’re pleased to be part of this historic delivery for Boeing and China,” said Tang Bing, vice president of China Eastern Airlines. “We look forward to working with Boeing to leverage the reliability, comfort, economics and good environmental performance of Boeing airplanes, and bring more value to our customers.”

Headquartered in Shanghai, China Eastern Airlines is one of the three major airlines in mainland China. Flying a fleet of more than 400 long-haul and short-haul airplanes with an average age of less than seven years, China Eastern Airlines serves nearly 70 million travelers annually and ranks among the world’s top five airlines in terms of passenger transportation volume.