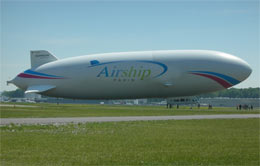 Tourists seeking an original way to take in France’s famed countryside have a new way to do it – in a helium-filled Zeppelin.

On Sunday Airship Paris’ 250-foot-long, 5-story airship began flights over the forests and villages northwest of Paris. The company says it’s received “lots” of reservations for flights. It says it’s the first commercial airship in the Paris region for 30 years.

The Zeppelin has room for 12 passengers, who can move about the large-windowed cabin during the flight. On clear days like Sunday, the Eiffel Tower was visible in the distance. Tourists can also see the Seine river and the Chateau de Versailles from 1,000 feet up.