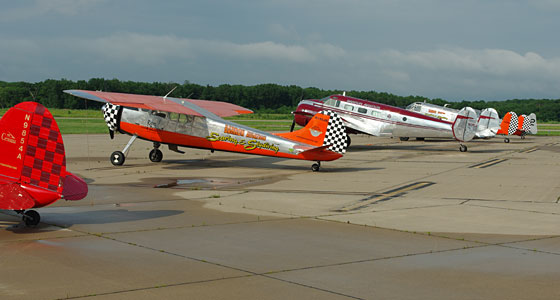 Several months ago, during a winter conversation, it was mentioned that Dillon could solo many different planes on his birthday. From that seed grew his idea to do it all with conventional geared planes more commonly known as ìtaildraggersî. This older design is known among pilots to require more training, attention, and skill than todayís tri-cycle geared planes. Barron Aviation, one of Michael Barronís companies specializing in these vintage planes and their flight training, agreed to sponsor Dillon with his effort. Not only would his first solo flights be in taildraggers, but most would be with vintage radial engines and two of the planes would be twin engine!

During the months leading up to this day Dillon Barron, his father Michael, and the Barron Aviation crew worked many full days and late nights repairing several planes damaged during a storm earlier this spring. Also on the work list was the newly acquired North American AT-6A purchased as salvage from a landing accident. The last two aircraft were returned to service just two weeks prior to the big day! This didnít leave much extra time for training, so much of Dillonís initial instruction took place during challenging wind conditions. The day after final assembly and inspection of the AT-6A was completed; Dillonís father took it up for a 30 minute test flight then immediately began with instruction. To Dillonís surprise, he found the plane a pleasure to fly.

Everyone woke to rain and advancing storms on Saturday morning, June 25th. Closer inspection of the weather radar revealed some breaks in the advancing front and the decision to preflight all the planes was made. Both Dillon and his father seemed quite confident they could work around the weather and still complete the flights. A little after 9 am all of the planes were serviced, inspected, and flight ready. It was time to begin this great adventure!

After several pictures Dillon and his father climbed in, buckled up and fired up the polished relic. A traditional warm up flight was made then the father climbed out and sent the son on for his first solo flight. His takeoff was textbook perfect, but no sooner than Dillon was in the air, the rain began and the wind changed directions. This seemed to be no surprise to the young aviator. We heard him make a radio call announcing the change in his traffic pattern and he circled around to make a beautiful landing in the opposite direction. Greeted with a handshake and hug from Dear Old Dad, he had completed his first solo flight!

For most student pilots this would be the climatic point, however, there were still 6 more beautiful vintage planes waiting for their turn with young Barron. The next lovely lady would be a 1952 Cessna LC-126-C, polished and painted in the bright Arctic Rescue colors. The military purchased some 62 LC-126 models in the early 1950ís and none saw adventure like the 11 assigned to Alaska. Equipped with wheels, floats and skis, they were used year round all over the region, including the Aleutian Islands.

The wind and rain were picking up when the plane taxied out but this would be nothing new for this seasoned bird. It turns out neither would be of any consequence for Dillon either. He made what would be the best landing of the day. The only way we could tell when the plane touched down was the spray behind the main wheels from the water on the runway. The bright colors set against dark skies and the unique sound of a radial engine, what an impression!

With the cross winds picking up Dillonís grandfather John, was getting nervous. His plane was next, a beautifully customized bright red 1950 Cessna 195-B! No-one except his son, Michael, has been allowed to fly this plane for the last ten years, and now it was going to be flown by a student pilot in crosswinds and rain! It didnít help when wind gusts and a subsequent balked landing forced Dillon to go around for another approach and landing. While the go around prompted a confident chuckle with an ìatta boyî from his father, no-one has been able to confirm Johnís eyes were open! This flight tied the recorded world record for ìthe most conventional geared aircraft soloed in one dayî.

Things were starting to look really ominous to the north! A peek at the weather radar showed a large front of storms moving into the area. Some of these storms topped 50,000 feet with large hail reported. There would only be time for one more flight before the storms hit the Hannibal Airport. Confident he would resume flying after the storms passed; Dillon elected to fly the Cessna 195 modified with a 915 cubic inch Jacobs engine. This plane, nicknamed ìBartî is used by the Rapid Descent drop zone for skydiving. Now the on looking skydivers were nervous! This was their ride as soon as Dillon was done with it. The performance of this stripped down, large engine machine, with only one kid in it, was impressive! There was also a great big smile on Dillonís face when he returned the skydivers their chariot; he had set a new world record!

Cake and conversation were enjoyed inside the hanger while the planes got thoroughly washed by the passing storms. Many of Dillonís friends and family were there for the dayís festivities, or possibly for the six different birthday cakes prepared by his grandmother, Marilyn!

After two hours of Midwestern monsoons the rain began to subside and thoughts again turned to the remaining three gleaming planes; two twin engine classics and a World War II advanced fighter trainer. These were saved for last both as the most challenging and favorites of a young vintage airplane enthusiast.

As
Michael climbed out of the familyís beautifully restored 1944 Beechcraft C-45H and watched it taxi away, he realized this would be the first time he had ever seen it fly from the outside. The polished plane with its sleek lines along with the sound of two throaty radial engines brought goose bumps to his arms and legs! ìThat will never grow oldî he said as he turned and walked back toward the spectator group. Knowing this particular plane offered the most significant challenges for his son, and the winds were now 15 gusting to 20 miles per hour, he watched intently as it came in for another sweet landing! As his instructor, even his father was impressed with his sonís handling of this plane. This also showed on the young manís face as he exited the plane down the airstairs. A new level of inner confidence had been achieved!

Along with this boosted confidence came a serious warning from dad; ìdo not give these next two planes any less attention or respect, they will bite you if you let them!î With the respected advice of his father he diligently worked his way around and into his next twin engine Beechcraft, a G-18S used at Hannibal for skydiving. An avid skydiver as well, Dillon has more takeoffs in this plane than landings! None the less, both were stellar.

He is down to one final plane, his favorite, the one he has worked so hard on the last four months, the North American AT-6A! The T-6 series, also known as the SNJ series by the Navy, was used throughout World War II as the advanced trainer for fighter pilots. As the last plane they would fly before being sent out in their assigned single seat fighter, the design and flight characteristics were made similar to the fighter planes of the day. This particular plane was manufactured in 1942 and used by the military as well as several subsequent civilian owners. One of these owners was William P. Lear, of the ìLearjetî family, which ìLear Fieldî (Hannibal Regional Airport) is named after. Prior to conducting this planeís test flight, the last time Dillonís father had flown in one was in his fatherís T-6 at the age of three. He remembered not being able to see much from the back seat. Now that he is much taller, he still canít see! The only way to see forward for landing is to have the person in front lean to the side.

With only 30 minutes less T-6 time than his instructor, young Dillon looks very at home as he taxis away with his dad standing along the taxiway. Again this will be Michaelís first time to see this plane in action! What a thrill to hear the engine go past at full throttle and see Dillon with the canopy slid open! Lulled into a relaxed state by Dillonís precision throughout the day, not many people noticed the gear was not down as he turned a rather brisk final approach. This however did not escape the eye of his grandmother, also a private pilot. While everyone else enjoyed the graceful fly by, her heart rate was just beginning to return to normal! After one last beautiful landing Dillon Lee Barron was greeted and applauded by a very proud group of friends and family!

At the end of this eventful day, Dillon had more than doubled the recorded world record, got to fly some of his dream planes by himself, and had six different kinds of cake!