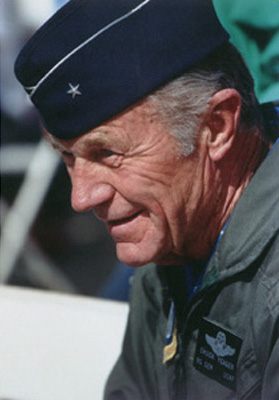 The 89-year-old Yeager, who was featured in the movie “The Right Stuff,” flew in the back seat Sunday of a McDonnell Douglas F-15D Eagle as it broke the sound barrier at more than 30,000 feet above California’s Mojave Desert — the same area where he first achieved the feat in 1947 while flying an experimental rocket plane, the Bell X-1.

The F-15 carrying Yeager took off from Nellis Air Force Base near Las Vegas and broke the sound barrier at 10:24 a.m. Sunday, exactly 65 years to the minute the then-Air Force test pilot made history.