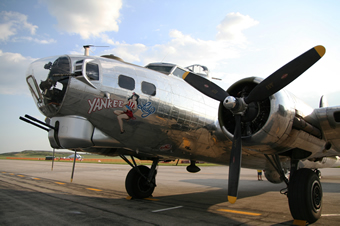 Dan Mullin had a curt answer when somebody at New Jersey’s Naval Air Station Wildwood questioned the effectiveness of the tail guns on the Boeing B-17 Flying Fortress bomber. “We won the war,” said Mullin, 94, of Ocean City.

That was the short answer Monday as the World War II veteran, who flew bombers during missions in North Africa, Italy and Romania, logging 35 missions and winning the Distinguished Flying Cross during 400 air hours under fire, came to NASW to see the B-17 “Yankee Lady.’’

The bomber is at the air station through Wednesday as part of NASW’s American Pride Days. The event includes lectures, live music and museum tours of vintage military aircraft.

For the complete story by Robert Degener of The Press of Atlantic City (Pleasantville, N.J.), click here.