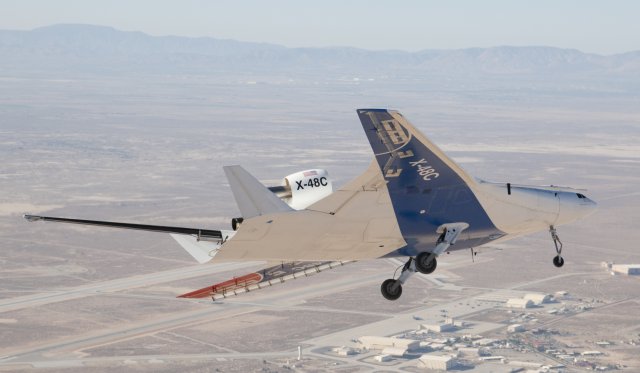 Boeing’s X-48C research aircraft flew for the 30th and final time on Tuesday, marking the successful completion of an eight-month flight-test program to explore and further validate the aerodynamic characteristics of the Blended Wing Body design concept.

All 30 flights were conducted at NASA’s Dryden Flight Research Center in California. The X-48C typically flew for approximately 30 minutes on most flights, reaching speeds of up to 140 miles per hour and attaining an altitude of about 10,000 feet. X-48C flight testing began last August.

“Working closely with NASA, we have been privileged throughout X-48 flight-testing to explore and validate what we believe is a significant breakthrough in the science of flight – and it has been a tremendous success for Boeing,” said Bob Liebeck, a Boeing senior technical fellow and the company’s BWB program manager.

“We have shown that a BWB aircraft, which offers the tremendous promise of significantly greater fuel efficiency and reduced noise, can be controlled as effectively as a conventional tube-and-wing aircraft during takeoffs, landings and other low-speed segments of the flight regime,” he said.

The X-48C, designed by Boeing Research & Technology, built by Cranfield Aerospace Ltd., and flown in partnership with NASA and the U.S. Air Force Research Laboratory, is a scale model of a heavy-lift, subsonic vehicle that forgoes the conventional tube-and-wing airplane design in favor of a triangular tailless aircraft that effectively merges the vehicle’s wing and body. Boeing believes the concept could be developed in the next 15 to 20 years for military applications such as aerial refueling and cargo missions.

The X-48C is a modified version of the X-48B aircraft, which flew 92 times at NASA Dryden between 2007 and 2010. The C model is configured with two 89-pound thrust turbojet engines, instead of three 50-pound thrust engines on the B variant. In addition, the wingtip winglets were relocated inboard next to the engines on the C model and the aft deck was extended about 2 feet at the rear.

“With the completion of X-48C flight testing, we have accomplished our goal of establishing a ground-to-flight database, and proving the low-speed controllability of concept throughout the flight envelope,” said Fay Collier, director of NASA’s Environmentally Responsible Aviation (ERA) project. “Both very quiet and efficient, the concept has shown promise for meeting all of NASA’s environmental goals for future aircraft designs.”

Boeing and NASA’s Aeronautics Research Mission Directorate funded the X-48 technology demonstration research. The effort was aligned with the agency’s ERA project, which has the goals to reduce fuel burn, emissions and noise of future aircraft. Both organizations will continue to develop BWB technology, with the aspiration of developing a larger-scale, transonic BWB demonstrator in the future.