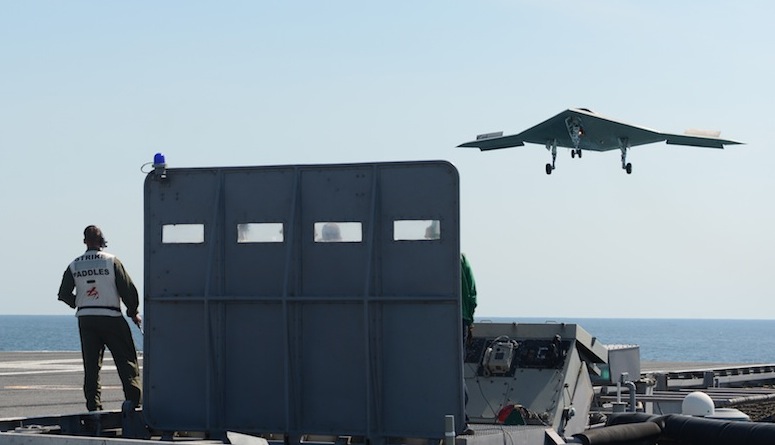 The Boeing X-47B Unmanned Combat Air System demonstrator (UCAS-D) made a catapult launch from the aircraft carrier USS George H. W. Bush (CVN 77) on May 14 off the coast of Virginia. With no human on board, the X-47B executed several planned landing approaches to the carrier before landing at Patuxent River, Maryland, or “Pax,” after a 65-minute flight. On May 17, the X-47B made several touch-and-go landings on the same carrier. The X-47B was slated to make its first carrier landing this summer and will eventually be demonstrated receiving air-to-air refueling.

The shipboard operations confirmed the ability of X-47B operators to navigate the aircraft within the controlled airspace around a carrier at sea and to seamlessly pass control of the air vehicle from a “mission operator” aboard the carrier to one located in the Mission Test Control Center at Pax.

The subsonic, stealth X-47B is the demonstrator for the U.S. Navy’s program to develop an autonomous, unmanned, jet-powered combat aircraft capable for operating from a carrier. Powered by a Pratt & Whitney F100-220U turbofan engine. It’s almost a flying wing and is tailless, evoking the B-2 Spirit bomber from the same planemaker, Northrop Grumman.

The X-47B demonstrators are unarmed and only one is wired to receive air refueling. The Navy says a production version — an autonomous combat aircraft with no one on board — is slated to be operational in 2019 and will be able to carry ordnance in twin internal weapons bays with a 4,500-pound capacity. It’s unclear whether this schedule can survive Washington’s budget crisis.