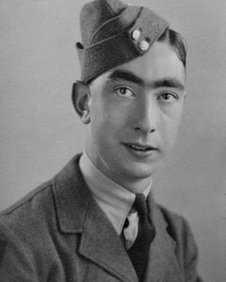 Wreckage from a Battle of Britain pilot’s plane has gone on display in a Sussex, England, pub just yards from where it crashed, burying him for 56 years.

Royal Air Force Sgt. Dennis Noble’s Hawker Hurricane was shot down over Hove in August 1940. His body remained buried with his plane under Woodhouse Road until 1996, when Battle of Britain historian Keith Arnold led an excavation of the site. Now, Arnold has presented a chunk of the doomed plane to the pub named after the war hero. On Thursday he met an eye witness to the crash for the first time.

Noble was shot down aged 20 after 27 days on active duty. John Samuel was 12 when Noble’s aircraft was shot down by the pilot of a German Messerschmitt during a dogfight. “There was this awful screaming sound,” Samuel said. “It was like a sound from hell.”

For the complete story by the BBC News, click here.