Each ship represents the evolution of carrier design. Commissioned as straight-deck vessels, they were progressively altered in the 1950s and 1960s with angled decks, steam catapults, and the mirror landing system. The Essexes received enclosed “hurricane bows” and modified island structures. Midway also was improved for the same reason: to operate heavier, faster aircraft as jets entered fleet service.

The only survivor of nine Independence-class light carriers was USS Cabot (CVL-28), brought back from Spain in 1989 and designated a national landmark the following year. A private organization tried to preserve her but lacked funds, and she was scrapped in 2002.

Still a sore point with naval enthusiasts 60 years later is the failure to preserve USS Enterprise (CV-6), “the fightingest ship in the U.S. Navy.” With more battle stars than any other American warship, she was called the one vessel that best personified the U.S. Navy in WW II. But not even Adm. Bull Halsey could save her, and she was sold for scrap in 1958.
In comparison to five carriers, eight U.S. battleships are preserved, in part because they are named for states and gain wider support than other ships. Additionally, two Pearl Harbor victims—USS Arizona and Utah—are shrines in Hawaii.

Other warships preserved in 30 states are 10 destroyers and 21 submarines, including U-505 in Chicago.

The cost of routine ship upkeep is enormous, as steel hulls and structures are always vulnerable to corrosion. Additionally, many interior spaces require climate control to prevent condensation that leads to rust. None of the historic ships could be maintained without the devotion of paid and volunteer staff. The 1,200-ton destroyer escort Slater (DE-766) in New York, for instance, receives 20,000 hours of attention each year.
The best way to preserve a ship is to keep it out of water—an obvious contradiction. Dry dock is the preferred method, but it is extremely expensive.

Because nearly all museum ships will remain in water, hull protection is essential. Epoxy paint on the exterior works well for extended periods; Hornet and Midway are good examples.
Water seeping into the hull is the greatest threat to struc­tural failure; it rots from the inside out. Some museum ships are grounded by flooding internal tanks. Unless the ballast
water is chemically treated, the ship will crumble.

Insight into the preservation of historic ships is provided by Cmdr. Pete Clayton, a retired carrier engineering officer. He emphasizes the importance of an impressed-current cathodic protection (CP) system, installed in the Hornet in 1999. He explains, “It virtually stops external hull corrosion. Intrepid did not have one for more than 20 years. All mothballed ships have a CP system—it’s nothing new, just needs to be maintained. Essentially what it does is put a platinum plating over the hull and reduces the rust potential of the hull in water eventually to near zero. Midway’s was installed on arrival in San Diego—her hull is in outstanding condition. Likely she will never need to be dry-docked.”

Many of the millions of annual visitors to historic ships are surprised to learn that it is far easier to maintain a wooden vessel of the 18th century than a steel ship. While wood eventually rots in saltwater despite any protective coating, the structure is relatively easy to replace, given the right type and treatment of oak. The frigate USS Constitution, “Old Ironsides,” dates from 1797 but remains afloat in Boston, where she occa­sionally spreads her sails. Today, perhaps 15 percent of her structure is original.

Carrier museums offer a double advantage, however, because they display aircraft onboard or nearby. Midway has at least 24, from WW II types, such as the Douglas SBD, to Vietnam-era jets and helicopters. The Intrepid park displays some 27 aircraft including noncarrier and foreign types, most notably an A-12 Blackbird, a Concorde, and the Space Shuttle Enterprise.
Whatever the type of vessel, almost any warship is also a war memorial. Some veterans are, therefore, opposed to their ships becoming tourist attractions because of the missing element: reverence. Old salts resent unruly children running, screaming, and spilling sodas where brave men died, or playing arcade games where battle dressings were applied.

Yet we are quickly running out of WW II veterans, and even Vietnam vets are thinning. Perhaps it helps to remember that once the human witnesses are gone, only the mechanical will remain.  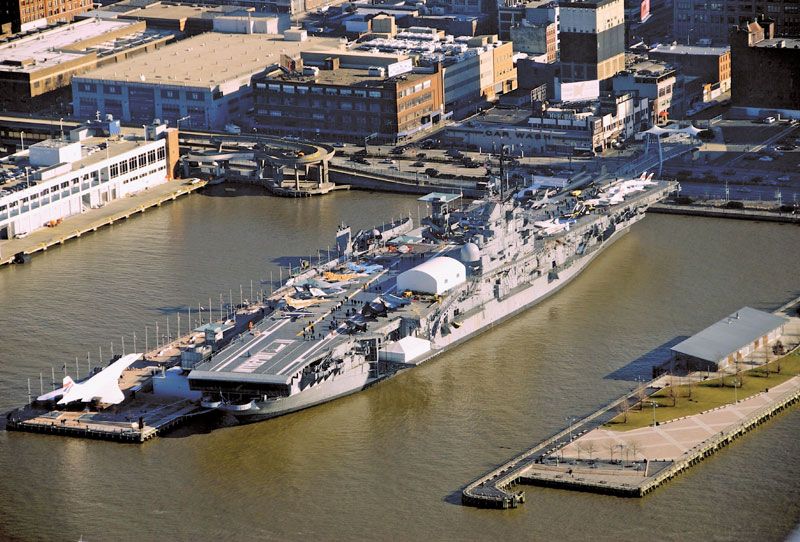 The USS Intrepid, one of the lucky few WW II carriers to be rescued from oblivion, is on display on the Hudson River in New York City. The ship was in almost continuous action from its birth as a straight-deck carrier in 1943 until Vietnam, when, in 1974, she was finally retired. Restored and re-equipped as a major aviation museum, she opened to the public in 1982. Intrepid not only has become a major tourist attraction and educational center but also was designated a National Historic Landmark. (Photo courtesy of Wikimedia Commons)