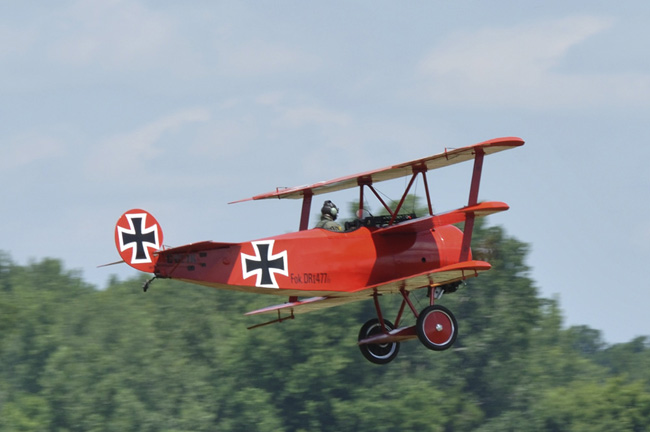 By the Experimental Aircraft Association

Four outstanding replica aircraft from the Great War Flying Museum of Caledon, Ontario, Canada, will participate in EAA’s World War I aviation centennial activities at the EAA AirVenture Oshkosh 2014 fly-in, which will be held July 28-August 3 at Wittman Regional Airport in Oshkosh, Wis.

The four aircraft – Sopwith 1-1/2 Strutter, Royal Aircraft Factory S.E.5a, Nieuport 28, and Fokker Dr.I – will be on display throughout AirVenture week and also fly several times during the daily afternoon air shows at Oshkosh. The airplanes are part of the Great War Flying Museum collection, which is dedicated to honoring the pilots who served with gallantry and distinction during the First World War.

“These aircraft are a magnificent addition to our centennial salute to World War I aviation,” said Jim DiMatteo, EAA’s vice president of AirVenture features and attractions. “The airplanes show how important aviation development was during that period while also demonstrating how far we’ve come in 100 years.”

Each of the aircraft is painted in the markings that honor specific pilots and flying groups, from the Manfred von Richthofen “Red Baron” Fokker Dr.I and the Nieuport 28 honoring American Ace Eddie Rickenbacker, to Canadian pilots such as ace Billy Bishop on the S.E.5a and R.F. Redpath on the Sopwith 1-1/2 Strutter.

“We truly appreciate what Oshkosh is and felt it was a must to be there this year. Oshkosh is Oshkosh – there is no other,” said Kees Van Berkel of the Great War Flying Museum. “On behalf of the museum members and the board of directors, we’re thrilled at the honor and privilege of taking part in the World War I aviation centennial. It’s something that you can only do once, so it’s a great opportunity.”

The GWFM was founded in 1970 by members of the Brampton Flying Club. The museum’s mission is “to provide the finest local presentation of World War I aviation history by acquiring, building, maintaining, and flying representations of period aircraft as well as displaying period artifacts for the education, entertainment and benefit of our members, and the visiting public.”

Further details and schedules of the World War I aviation centennial commemoration activities will be announced as they are finalized.