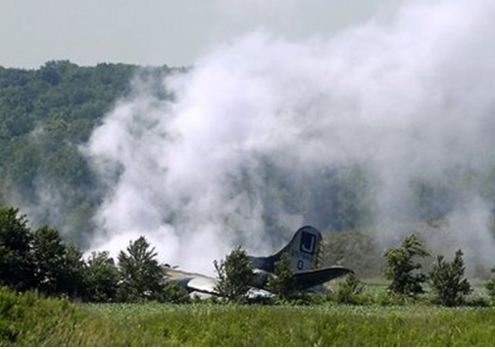 Itís a sad day in aviation, as a historic B-17 crash-landed in a field in Oswego, Illinois Monday, June 13th, and burst into flames. Thankfully, the FAA has reported that all seven people onboard survived without injury.

A World War II bomber made what appeared to be an emergency landing in a cornfield Monday and all seven people on board escaped before it was consumed by fire, according to the Federal Aviation Administration.

ìThe plane departed the airport, noted an emergency and the pilot made what appears to be an emergency landing, after which the plane was consumed by fire,î FAA spokeswoman Elizabeth Isham Cory said in an email. None of the passengers were injured.

The accident happened right after the plane took off from the Aurora Municipal Airport and the plane landed in an Oswego cornfield outside Chicago, Cory said. The National Transportation Safety Board is now investigating the incident.

Jim Barry, who lives in a nearby subdivision, told the Chicago Tribune he heard a low-flying plane and looked to see it. The engine on the bomberís left wing was on fire, he said.

ìHe attempted to make a return to the airport, but couldnít make it so he put it down in a corn field,î Kunkel told the Chicago Sun-Times.

Firefighters from Oswego, Sugar Grove and Plainfield responded to the scene. Fire officials said they were having difficulty getting to the aircraft because of wet fields.

The B-17 Flying Fortress was made in 1944. Authorities say it is registered to the Liberty Foundation in Miami.

An email to the Liberty Foundation from The Associated Press seeking confirmation wasnít immediately returned.