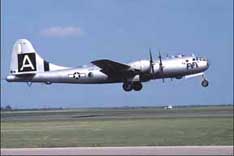 The Commemorative Air Force’s B-29 Fifi ñ the worldís only flyable B-29 ñ has been temporarily grounded by engine problems. To return the rare airplane to flight, the B-29/B-24 Squadron must raise a minimum of $3 million to custom fit the plane with new engines. The process will take at least two years, but without the updated engines the aircraft will continue to experience the same engine problems that have plagued it in the past. Those wanting more information or wishing to help can call (432) 563-1000, ext. 0 or go to www.commemorativeairforce.org and click on the “Save Fifi” link.The B-29 was originally fitted with the Wright R-3350-57AM engine, which has had a less-than-desirable reputation since its inception. True to this reputation, Fifi has experienced numerous problems with its engines in the 30-plus years she has been flying with the CAF. Following the discovery of metal in its oil, the decision was made to not fly the plane again until it could be refitted with new, improved engines. The plan is to combine R-3350-95W and R-3350-26WD engines to custom build engines for the B-29.

Fifi joined the Commemorative Air Force fleet in 1971, after it was rescued from the desert at China Lake, Calif. The B-29 first started touring in 1976 ñ six years following its recovery from China Lake.

A big step towards financing the new engines came recently (October, 2006) when Texas inventor and industrialist Joe Jamieson pledged $2 million to help return to flight. In July, the CAF announced FiFi was grounded, then, in August, Jamieson saw an article about FiFi’s plight. He contacted the CAF and pledged the funds.

Jamieson is an airframe and power plant mechanic, a former Air Force pilot, an air transport pilot and an inventor and industrialist who focuses his efforts on enhancing the safety of transportation systems. ‘New engines for the B-29 make its operation safer, so it is therefore reasonable for Mr. Jamieson to pledge some money to help make it happen,’ said Raeleen Behr, public relations for Jamieson’s company, American Automation Technologies, Inc.

The pledge by Jamieson still leaves $1 million to finish the campaign. ìMr. Jamiesonís pledge is a tremendous jump-start for our campaign to make Fifi airworthy again,î said CAF Vice President of Development Rusty McInturff. ‘However, we still have a long way to go, and every donation is important, regardless of the amount.’