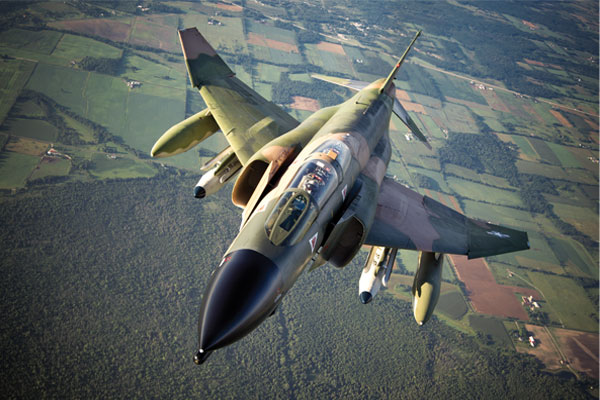 Before I joined the United States Air Force (USAF) in 1955, I was just a “good ol’ boy” from Macon, Georgia. But flying a jet fighter only enhanced some of those Southern traits. Less than 12 years later over Vietnam I become a MiG killer with the Triple Nickel- 555th Tactical Fighter Squadron.

My first jet assignment was with the 309th Strategic Fighter Squadron flying a fighter called the F-84F Thunderstreak. Nothing could beat an F-84 going downhill, that was until the F-100 Super Sabre came along. My first thought of the F-100 was, “Boy, it sure has a big cockpit!” But each time you end up changing airplanes, you ended up thinking that way. They were all bigger than the previous one you came from. The F-100 had a lot more power and with afterburner it felt like you were dancing on the head of a needle sometimes as you had to constantly “fly” the F-100 — there was not much room for error.

Eventually, I ended up sitting nuclear alert with them while stationed in Korea and after my stint there I was sent to USAF Fighter Weapons School at Nellis Air Force base, Nevada, where I really learned how to fly and fight. After 11 weeks of hard flying in the F-100 and a lot of academics, I graduated the Top Gun of my class. In time, I was asked to stick around as an F-100 instructor and also teach air combat maneuvering and fire control systems. The early days of air-to-air missile work were quite simple. We had a five-inch high velocity aircraft rocket on one side (HVAR) with flares on the back of it, and when you fired it, that become your target. Then you would simply pull up and fire your air-to-air missile at those flares and it would seek it out and blow it up. It was a one-man job until the F-4 Phantom came on line.