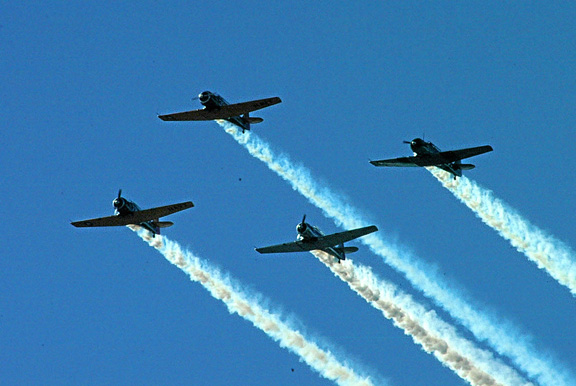 If you’re going to any air show this summer, Wings Over Gaylord in Gaylord, Mich., is the one to see.

The annual Father’s Day weekend event at Gaylord Regional Airport kicks off Friday with a parade of historic military vehicles rolling down Main Street, east to west, at 2 p.m. Air show organizer and airport manager Matt Barresi said downtown will be the best spot to catch the fast-moving convoy.

Aerial and ground demonstrations begin at 1 p.m. Saturday and Sunday and include thrilling performances by vintage and modern fighter planes and jets, a jet-powered school bus and outhouse, and an extremely low-flying show by Michael Vankin and his Extra 300.

“He performed in 2010 and flew so low to the deck that the (Federal Aviation Administration) called him to the back room,” Barresi said. “He got really low for some of those tricks and we expect him to push the envelope for us again.”

For the complete story by Chris Engle of the Gaylord Herald Times, click here.