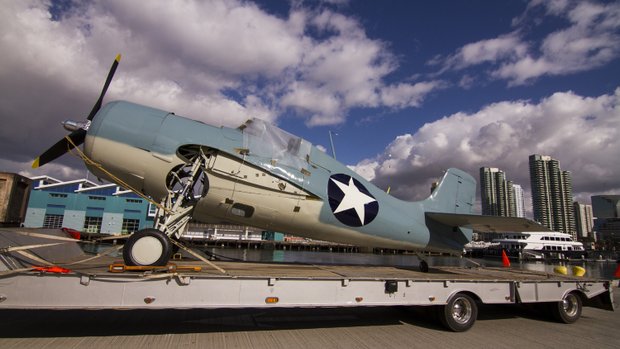 One of the stars of the Battle of the Midway now has a home at that USS Midway Museum.

A rare Grumman F4F Wildcat arrived at the downtown San Diego museum after several years spent in restoration at the hands of Midway volunteers. U.S. Navy pilots flying the Wildcat were pivotal in the June 1942 battle that changed the tide of World War II just six months after the Pearl Harbor attack. The stubby Grumman aircraft was the Navy’s No. 1 fighter at the beginning of the war.

“It did a beautiful job for the way it was, an older airplane,” said Glenn Tierney, 89, a museum volunteer who flew Wildcats during his training to be a pilot.

For video and the complete story by Jeanette Steele of UTSanDiego.com, click here.