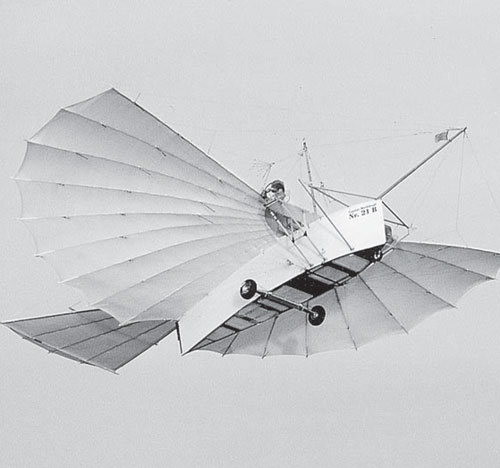 Here it comes again: the Great Who Flew First Debate. This time it is courtesy of Jane’s All the World Aircraft, considered to be one of the world’s encyclopedic, not-to-be-doubted sources of aviation information and their radical shift in which they de-throne the Wright Brothers and enshrine Gustav Whitehead as the first to achieve powered flight.

Flight Journal, from its inception in 1996, has been active in presenting the various sides of that argument and we are about to do it again. In 1998, Bill O’Dwyer, one of our best historical writers and experts penned a piece that chronicled the Whitehead claims and we’re presenting it here in its entirety.

In an effort at maintaining a neutral position, we’re also printing the essay from Dr. Tom Crouch, the Smithsonian’s Aeronautics Curator, which the Smithsonian’s National Air and Space Museum issued as their official statement on the subject.

Also below, you’ll find a detailed e-mail from historical investigator John Brown, who unearthed the information/proof on which Jane’s based their changed of first flight attribution.

Do we now have incontrovertible proof that Whitehead flew two years before the Wrights? Maybe. But, we’ll continue to post both positions and let you make up your own mind whether we change the history books based on the available information. 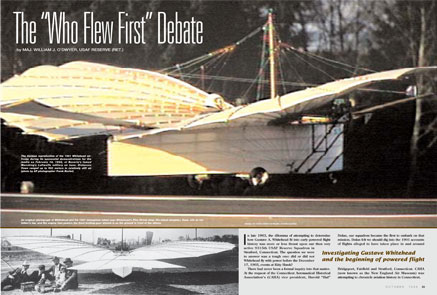 The Flight Claims of Gustave Whitehead
By Tom Crouch, Courtesy of the National Air and Space Museum

John Brown, an Australian researcher living in Germany, has unveiled a website claiming that Gustave Whitehead (January 1, 1874-October 10, 1927), a native of Leutershausen, Bavaria, who immigrated to the United States, probably in 1894, made a sustained powered flight in a heavier-than-air machine on August 14, 1901, two years before the Wright brothers. The standard arguments in favor of Whitehead’s flight claims were first put forward in a book published in 1937, and have been restated many times. With a new wave of interest in the Whitehead claims, the time has come for a fresh look.
What are the claims?

I am the historian who uncovered a photo of Mr. Whitehead in powered flight in 1901: http://www.gustave-whitehead.com/history/detailed-photo-analysis/

Dear Tom,
Thanks for taking the time to respond to my writings about Gustave Whitehead in a Smithsonian press release, click here to read the letter

This is in reply to your widely distributed, ”Open letter to Tom Crouch,” posted on March 24, 2013. I will make this as clear and concise as I can, addressing what seem to be your major points. Click here to read the letter

A New Player, New Demands
The daughter of FJ writer William O’Dwyer, Sue Brinchman, has taken up the cause of her father, i.e. to establish Whitehead as the first to fly and is demanding that the Smitshonian be forced to invalidate the above mentioned contract. Click here to read the letter