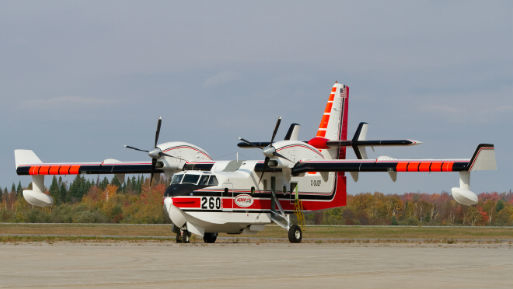 Local, state and federal resources were all needed to get last week’s Oklahoma wildfires under control. One federal resource was used here for the very first time. It’s a large amphibious air tanker nicknamed the Super Scooper.

The Super Scooper, also known as the Bombardier 415, was the saving grace for fire crews in Guthrie. Not only was this week the first time the aircraft was used in Oklahoma, but it’s the first time it has been used ever.

“It was designed, engineered and built from the ground up for one purpose and one purpose only and that’s aerial fire fighting,” said Kevin Merrill, the CL 415 aircraft manager. The CL 415 certainly did that job in Oklahoma. The extremely dry air and landscape led to unprecedented fire conditions in Guthrie. It quickly became more than local and even state crews could handle.

For the complete story by Christine VanTimmeren of KOKH-TV, click here.