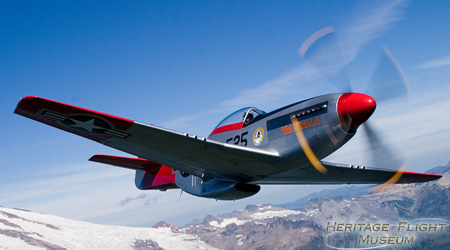 The Heritage Flight Museum, located at Bellingham (Wash.) International Airport, has announced that it will be moving its aircraft and collections to its hangar at Skagit Regional Airport.

“The people of the community have been fantastic and we regret our need for departure,” said Heritage Flight Museum Executive Director Greg Anders. “We are a small business that cannot survive in an infertile environment. And we are a community asset that has options to be where our value is appreciated by the elected officials and their staff. The Port of Skagit understands the Heritage Flight Museum’s ability to be a catalyst and stimulus to a community’s economy, and they set the stage for a successful business environment. We must go where we are more likely to thrive.”

The museum will hold its final monthly fly day in Bellingham on Nov. 16. Following that event, museum staff and volunteers will begin the job of moving the entire collection. Individuals, groups or businesses interested in supporting this endeavor are encouraged to contact the museum.

The museum will be closed during the initial phases of the move, but may be open to drop-in visitors at the Skagit facility as they become more settled in. Some construction will be required to make the new facility fully ADA accessible and acceptable for large numbers of visitors. It is hoped that a soft opening can be accomplished at Skagit Regional Airport by February, with a grand opening maybe as early as the Tulip Festival in April.

Founded in 1996 by Apollo 8 astronaut Maj. General William Anders, the Heritage Flight Museum is a nonprofit 501(C)(3) organization dedicated to the preservation and flying of historic military aircraft. The museum settled at Bellingham International Airport in 2001 and has been developing their displays and their community programs since then. Plans for the move to Skagit, into larger facilities, include bringing all of the collections and maintenance work under one roof, continuing monthly and annual events, developing a gift shop, and providing event space for corporate and private events.