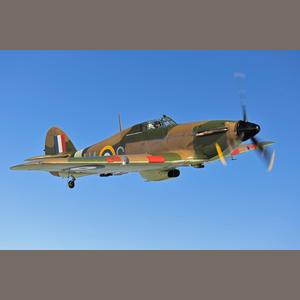 A Hawker Hurricane fighter aircraft like one of the many that defended British shores during World War II’s Battle of Britain will be the star attraction at Bonhams’ sale of Collectors’ Motor Cars and Automobilia at Mercedes-Benz World Brooklands – the spiritual home of the Hurricane – in Weybridge, Surrey, England, on Monday, Dec. 3.

The Hurricane, the Royal Air Force’s first monoplane fighter, had its finest hour during that battle, where it shot down more enemy aircraft than its famous service partner the Supermarine Spitfire.

Brooklands, where the Bonhams sale will take place, has its own history with the aircraft: it was assembled and first flown in prototype form there in 1935, and altogether more than 3,000 Hurricanes were produced on site – one fifth of the total built.

Hurricane Mk XIIa 5711 (G-HURI), equipped with 12 Browning .303 machine guns, was built in 1942 and joined the Royal Canadian Air Force the following year, remaining in Canada for the duration of the war. Its service history has proved elusive, but it may have protected convoys on the east coast shoreline from German U-boat activity, or been used as a training aircraft.

Struck off charge from the RCAF in 1947, it was bought by a Canadian syndicate. It was later restored to flight, making its first post-restoration flight in 1989, before being acquired by the Historic Aircraft Collection in 2002 and housed at the IWM Duxford in Cambridgeshire.

Following extensive program of refinements including the fitting of the correct Merlin engine, G-HURI now flies as ‘Z5140,’ with the code letters HA-C and in the Battle of Britain colours worn by a Hurricane IIB flown with 126 Squadron during the siege of Malta. During the Collection’s ownership, it became the first Hurricane to return to Malta since WW II, and this summer was the first to fly to Russia since that time, where it flew in the presence of Russian president Vladimir Putin at the Moscow Airshow.

Tim Schofield, director of the Bonhams UK Motor Car Department, said: “This Hurricane is one of only a handful of these iconic aircraft still flying today, and is presented for sale in highly original condition…We expect it will be a lot that will generate much interest among buyers at our December sale, and will complement the important motor cars we already have consigned for the sale.”