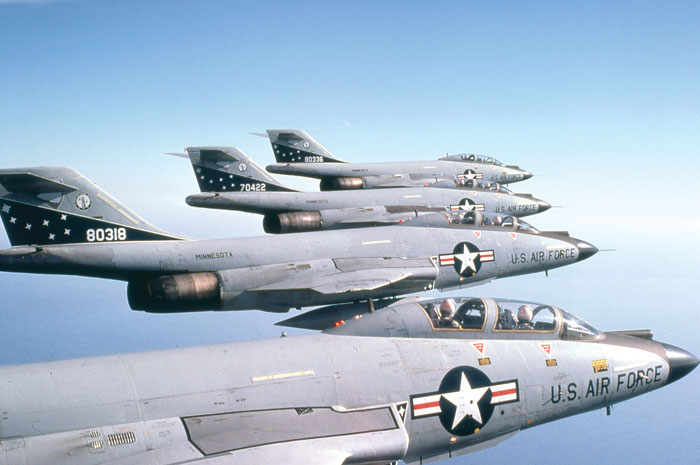 By 1959, Major Ernest Craigwell, Tuskegee Airman and a current Air Defense Command fighter pilot, had already enjoyed his fair share of time flying hot jets and a certain modest measure of notoriety. Two years earlier, his role flying F-51s alongside Korean War legend Dean Hess had been dramatized in the popular Universal-International feature film Battle Hymn. But unlike his screen counterpart actor James Edwards, who was dwarfed by the famous height of film star Rock Hudson, Craigwell, at a larger-than-life 6’2″, towered over most of his flying contemporaries. Add to that a natural gift with a control column and, above all else, an unquenchable passion for flying, one had a personal profile ready-made for the demanding, backbiting, yet ultimately exhilarating performer, that was the McDonnell F-101B Voodoo. The long-range interceptor would become one of Col. Craigwell’s career favorite mounts.

’Darts to Voodoos: The dance begins
A New York native by birth, “Craig” Craigwell had been flying F-102As at Long Island, New York’s Suffolk County AFB with the Second Fighter Interceptor Squadron when, in 1959, the unit began transitioning onto the two-seat F-101B.
According to Craigwell, “The 102 was like a Cadillac running on a smooth blacktop highway at 60 miles per hour. Four lanes, no traffic in sight—no worries. It was a very stable platform—you’re talking about low-wing loading on a delta planform. It was very smooth, reliable, no hidden idiosyncrasies, nothing to bite you in the rear. It was fun to fly.

“In the 101 you’re on a bumpy road (with its so-called straight-and- level ‘one-G buffet’) and there’s a whole lot of other traffic out there. There’s something going on all the time and you’ve got to pay close attention to what’s happening. I liked to fly at high altitude, always did. Forty thousand feet was my typical cruise altitude when I was going somewhere. Well, I had to give up on 40,000 when I was flying the 101 because of that buffet. The airplane always required so much attention at Mach point nine. Plus, you had this big rock hanging over your head. If you mishandled the controls, this thing would pitch up and go all kinds of haywire on you. For new pilots, it was an issue of overcontrolling the aircraft and going beyond the flight envelope. For instance, if three Gs was what you were allowed at a given altitude and air speed, if you attempted to go to 4Gs, or went to 4Gs unintentionally, the airplane might suddenly pitch up and tumble out of control. The ‘pitch up’ was actually a high-speed stall and the airplane suddenly was no longer aerodynamic.

“They told you to push the stick forward and try to get the airplane pointed downward. When you felt your controls starting to answer again, you could start pulling it out gently, being careful to stay within prescribed parameters.

Introductions weren’t always civil
“New pilots were thoroughly briefed on how to avoid the pitfalls of pitch up. We, nevertheless, lost a squadron airplane, even when we did everything by the book. Both crew successfully bailed out. It was a new man being checked out in the airplane. He was one of the pilots in my flight; he was a very good pilot. I believe he also came from an F-102 unit. He had an instructor pilot chasing him on his first flight in the 101. It was one of those rare times when we were doing everything by the book. And somehow or another, this new pilot went beyond the envelope and the plane pitched up. The instructor pilot in the chase plane said, ‘Okay, no sweat,’ and the pilot followed the instructor pilot’s recovery instructions to the letter but the airplane was not responding quickly enough. He was losing too much altitude and so both the pilot and radar operator punched out.”

Craigwell recalled that the Voodoo lost a minimum of some 15,000 feet recovering from a pitch up incident and 10,000 feet was deemed the absolute lowest permissible altitude before beginning the ejection sequence.

Col. Craigwell today recalls that the Voodoo’s manufacturer, McDonnell Aircraft, sent a company pilot around to the various USAF F-101 squadrons to further brief pilots on the pitch-up phenomenon—‘a sword of Damocles problem’ never resolved by the company’s engineers. “The company test pilot was Don Strock, as I recall, a civilian, a very good man. He was trying to show us how far we could go with the airplane—what the onset felt like. Don kept telling us the pitch up was recoverable. He did it a number of times in his factory airplane. But he had an extra drag chute with a very long line attaching it to the airplane. If the normal drag chute line was, say, 75 feet, his was 175 feet. This was important to get the chute out beyond the turbulent air around a tumbling airplane. He also had a cannon cartridge to quickly shoot it out of the immediate vicinity of the airplane into the cleaner air. Now, normally, this special chute arrangement worked quite well for Don. But even he had to let one go one day when the airplane refused to stop tumbling.”

It’s all about the Gs and the Gee Whiz
Needless to say, the Voodoo’s G meter soon became one of the most critical instruments on the airplane. And within the Second Squadron, Maj. Craigwell served a key role as one of the unit’s two trusted maintenance test pilots. “In the case of the 101, when they would do maintenance on a bird, they wanted to make sure the G meter was really accurate. It was just a small inch and a half instrument and that was not much in size to be depending on so heavily in a 101. We were on Long Island and Grumman was out there. Their test pilots had a three-inch G meter that they could install for a test flight. Well, boy, they showed us that three-inch meter and we were home free! We thought that was the best thing since sliced bread! And so they loaned us about three of these removable three-inch G meters. Whenever I or the other pilot had to do this special hop to test our little G meters, we’d put in that Grumman meter too. It was very accurate and we felt much more comfortable taking the airplane to its design limits.”
And while Col. Craigwell himself judiciously avoided a pitch up incident in the Voodoo, negative discussions of the interceptor’s backbiting nature for the unwary begs the question: What was there to like about the F-101B Voodoo? Craigwell’s answer is quick in coming.

“Speed! I remember sitting at the end of the runway at Suffolk County one day (in 1959). I punched the clock and released the brakes and two minutes later I was going supersonic at 40,000 feet. Now, in those days, I had never done anything like that. As a point of comparison, I’d checked the same profile in an F-94C, I think it was, a year or so earlier. It had taken me eight minutes to reach the same altitude!”

The Voodoo was powered by two Pratt & Whitney J57 turbojet engines. It was a popular powerplant with the USAF in the late 1950s, powering the F-100, F-102, as well as the Boeing B-52. But the F-101 was the only fighter of its day to be powered by two J57s. In afterburner at takeoff, Maj. Craigwell would have had nearly 35,000 pounds of thrust at his disposal. Its exceptional Mach 1.9 (or 1,232mph) of speed was fully half again as fast as his earlier F-102 mount and only some 250mph less than that of the Vietnam era’s F-4 Phantom.

The performance to catch the Russkies
“Now when you talk about speed, that gets into performance. Performance in an interceptor is not the same thing as performance in a pure fighter aircraft. Interceptors of the 1950s were rarely designed to go through all the aerial combat maneuvers you think of today. They were designed to go upstairs fast and shoot down Russian bombers. The important things were speed, a long-range radar and a good missile. And, in that regard, the F-101B was simply a fantastic performer!”

At the height of the Cold War, standing runway alert was simply part of an Air Defense Command pilot’s weekly schedule.

“By the end of Suffolk County’s main runway was a hangar complex which held four 101 aircraft, side by side. Downstairs there were facilities for the ground crewmen. And we pilots were upstairs where we had our lounge chairs and television. We were on 12-hour shifts, as I recall. When a scramble was called we headed out onto a curved taxiway that you could hit a 50mph and not peel the tires getting to the main runway.

“Night intercepts of stray airliners were among the more interesting operations. When we intercepted an airplane at night it was, first, to see if it looked like an airliner or a Russian bomber—though they could have had a bomb on an airliner too. We wanted to get the aircraft’s registration number, if it was a civilian or commercial plane. Often we would turn off our running lights altogether as we pulled up alongside the airliner’s tail so they wouldn’t know we were even there. Usually at night the passengers had their window curtains closed anyway. What the Air Defense system wanted was the plane’s registration number to confirm its legitimacy. My radar man had a very powerful flashlight and a pair of binoculars. Later on, the airlines started getting smart and lighting up their tails, which helped us out a great deal.”

Proficience meant flying it … a lot!
Typically, an F-101 pilot wanted to get a minimum of 20 flight hours a month. But Maj. Craigwell, who had earned his rank “below the zone”— that is early because of his aggressive approach to flying, insisted, “You could get 30, or even 40 hours a month—if you worked at it. Typically, five days a week we worked and trained, but when the weekends came we would allow maybe two or three airplanes to go on a cross-country for the weekend. So, those of us who were eager, like myself, we naturally spent a lot of weekends on the road. On the road you could get as much time as you wanted. You could fly maybe three flights a day for two days. From New York in winter, I’d typically fly down to Florida. Humans like nice warm weather. So, in the wintertime the guys would tend to go south. I’d fly down to MacDill, Tyndall or Eglin and head for the beach. But the main thing I was doing was building my proficiency with my flight planning and cockpit time.”

Today, retired Air Force Col. Ernest Craigwell looks back with his fondest memories focused on having flown the F-51 Mustang and the F-86 Sabre—but the F-101B Voodoo is not far behind.