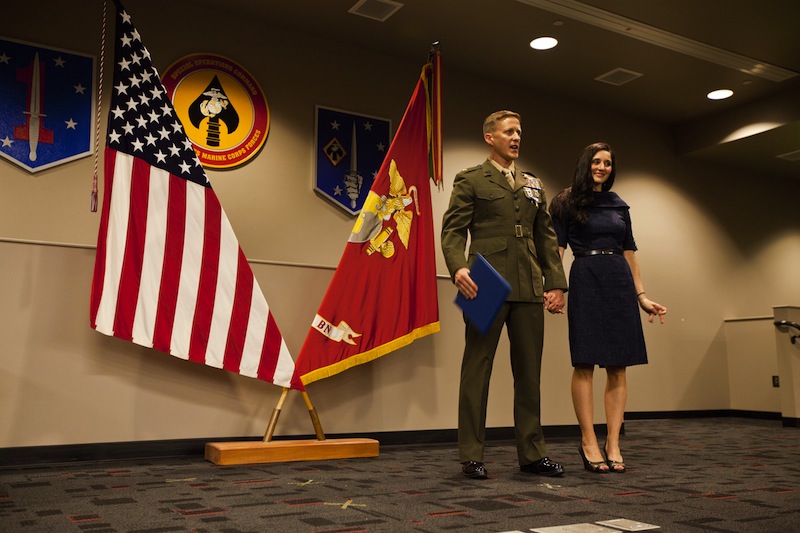 Maj. Robb McDonald, air officer with the 1st Marine Special Operations Battalion, received the Silver Star aboard Camp Pendleton, Calif., on Monday for taking immediate action against the enemy while deployed to Afghanistan.

“Murphy’s Law is alive and well wherever you go,” Toolan said. “That’s the great thing about being a United States Marine, is you adjust and overcome.”

After the enemy fatally wounded McDonald’s commanding officer on the night of Sept. 14, 2012 aboard Camp Bastion, Afghanistan, he took control of Marines immediately.

“There was a lot more going on than what was read in that citation,” McDonald said. “It was a collaborative effort of everybody that was out there, and I’m being awarded for that effort.”

While under attack, McDonald borrowed a rifle, engaged the enemy, and coordinated two helicopter strikes that ended the attack.

“For those of you that aren’t aware of the fact that every Marine is a basic rifleman, those guys proved it in spades on that particular day,” Toolan said.

After mentioning the men he fought alongside during the attack, McDonald addressed his wife and the battle she dealt with simultaneously.  While fighting opposing forces, McDonald’s son was undergoing a major surgery as an infant. Jennifer McDonald, four months pregnant at the time, received news of the attack and had to pray for both her son and her husband.

“After sixteen hours, and after everyone in the squadron called, I called and let her know I was alive,” McDonald said. “I just want to recognize my wife, because I love her, and I’m really proud of her for that.”

Two Marines were killed during the attack, but many Marines were saved due to the efforts of McDonald and the Marines he commanded.