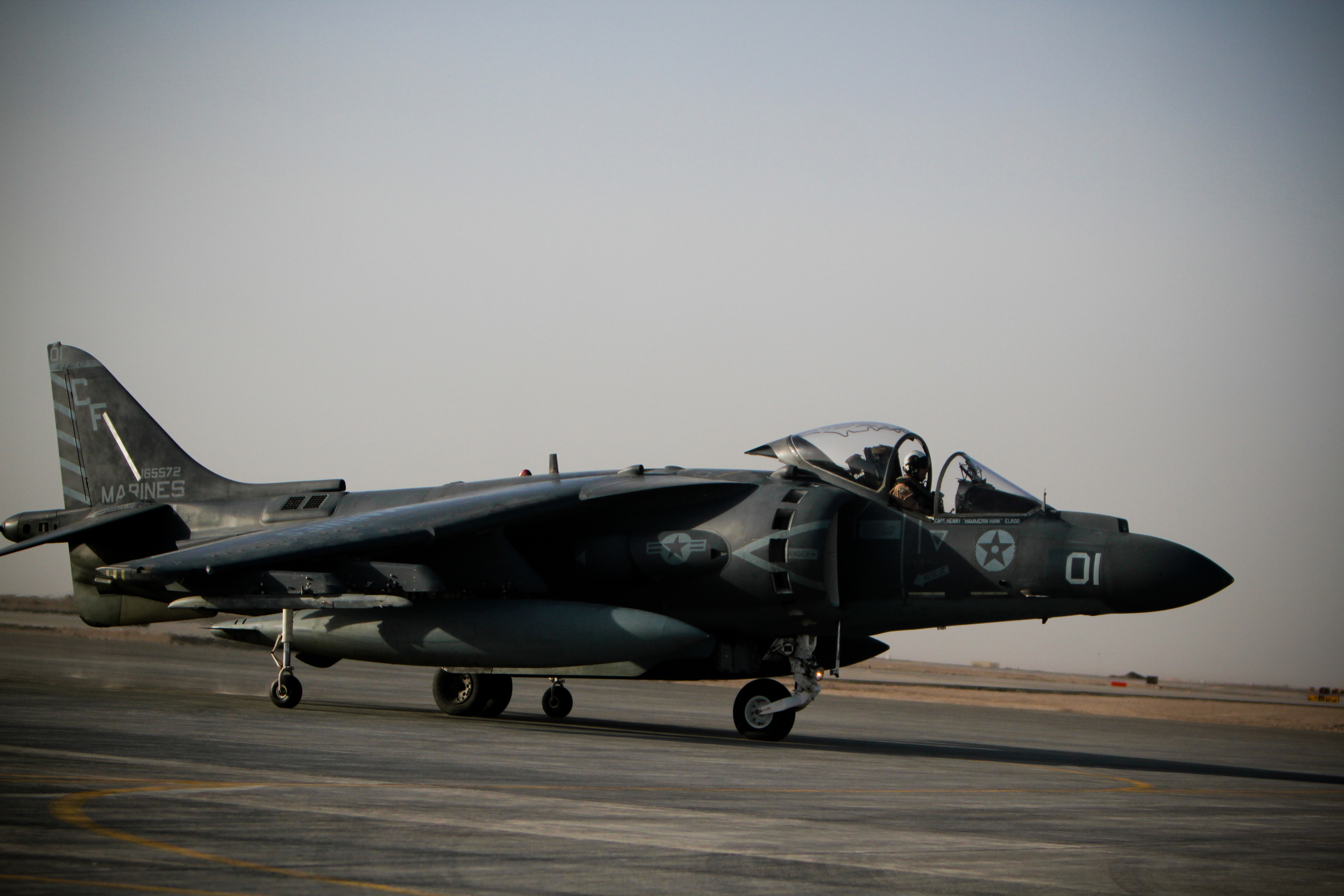 Two McDonnell Douglas AV-8B Harrier II Plus aircraft appear to dot the gray sky, as ground crewmembers prepare for their arrival. The aircraft are more than 46 feet long and have a wingspan of 30 feet 4 inches. They roar through the Afghanistan sky, a symbol of U.S. Marine Corps air superiority.

After a Sept. 14 insurgent attack at Camp Bastion, Afghanistan, Marine Attack Squadron (VMA) 211 endured not only the destruction of six of its presumed 10 aircraft (two were seriously damaged) but also the tragic loss of their commanding officer, Lt. Col. Christopher Raible. Just less than two weeks after this tragedy, the squadron is pushing forward to complete their deployment in Helmand province.

The Harrier squadron, known as the Avengers since World War II, remains fully operational and continues to provide support to ground troops throughout Regional Command Southwest’s area of operations.

“We are used for close-air support for the infantry battalions,” said Capt. Matthew Pasquali, a pilot with VMA 211, 3rd Marine Aircraft Wing (Forward). “We are providing patrol overwatch, scanning for known improvised explosive device implementing spots and looking ahead of patrols for typical ambush positions.”

This is Pasquali’s fifth deployment and third to Afghanistan. The squadron deployed in May 2012 and has stayed busy throughout their approximate five months in Afghanistan.

“I think we’ve been employed in support of ground operations more than 50 times thus far,” said Pasquali, from Houston, Texas.

With a max speed of 673 mph, the Harrier provides fast air support to coalition forces throughout the area. Armed with a 25-mm five-barreled Gatling gun, the aircraft can do much more than provide reconnaissance.

“If it comes to it, we provide close-air support with 500 pound bombs or 25-mm gun runs,” said Pasquali.

The squadron provides ground units with a precision targeting capability for close-air support, which makes the Harrier squadron a vital piece of the Marine Air-Ground Task Force.

“The insurgents have no air force,” said Pasquali. “They can attack our friendlies with rocket-propelled grenades and small arms fire, but we can answer back from altitudes that they can’t attack us.”

Harriers allow a commander the flexibility to operate from ship or shore; providing the ability to conduct fire support, close-air support, aerial reconnaissance or be an aerial escort for other aircraft or troops on the ground.

“Without the Harriers, the Marine Corps would rely on outside sources for fixed wing attack aviation,” said Capt. Tim Otten, a pilot and command adjutant with VMA-211.

Otten said the Harriers are piloted and manned by Marines, which creates a level of familiarity between the air and ground units. This makes operating easier and more efficient.

“We have a better understanding of what is happening on the ground because those are our brothers that we went through boot camp or officer candidate school with,” said Otten, from Norfolk, Va.

The squadron continues to support the ground units with the Harriers when needed. They understand the importance of their mission here in Afghanistan.

“Every Marine knows another Marine that is out on the ground,” Otten said. “This job gives me the unique ability to help Marines. That’s the best part, trying to provide the best support I can.”

While the past several days have been difficult for the VMA-211 Marines, the squadron has overcome adversity in the past. During World War II, the squadron was attacked by Japanese forces that destroyed seven of the squadron’s 12 aircraft. Despite the losses, the two weeks following the attack, VMA-211 continued to take the fight to the enemy. While fighting the Japanese, the squadron fought off several enemy attacks and destroyed four naval warships.

Just as VMA-211 did during World War II, they will push through. The Marines know they have a job to do and intend to complete their mission and continue to provide the close-air support for Marines on the ground.