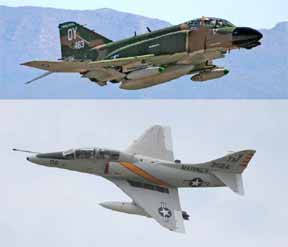 Advanced program allows pilots to fly in the F-4 Phantom II and TA-4J Skyhawk.
The F-4 Phantom II and TA-4J Skyhawk are the most recognized fighter jets of the Vietnam War. Both are well known for being fast, highly maneuverable and lethal. The Collings Foundation, based in Stow Massachusetts, saw the importance of preserving these legendary jets for Civilian Flight Training Programs and “living history” events. The Foundation is now offering, for the first time ever, flight experiences to members of the public. This once in a lifetime opportunity allows pilots to experience the most important jet fighters of the Vietnam/Cold War era from the best possible perspective, the cockpit of this legendary aircraft! Flight Operations Director Rob Collings explained, “The F-4 Phantom embodies all the characteristics expected of an aircraft that crews affectionately called the `Rhinoí. It is massive, powerful, fast, loud, and can carry a large payload. Its two General Electric J-79 engines produce over 35,000 pounds of thrust, capable of propelling the fighter to over twice the speed of sound”.

The A-4 Skyhawk is an attack aircraft originally designed to operate from United States Navy carriers. Fifty years after the types first flight, some of the nearly 3,000 Skyhawks produced remain in service with smaller air forces around the world. The original designer, Ed Heinemann, opted for a design that would minimize size, weight and complexity. Due to its nimble performance, power and armament capabilities the Skyhawk received the nicknames “Heinemann’s Hot Rod” “Scooter” “Tinker Toy” and “Bantam Bomber”.

The Collings Foundation was allocated a Douglas TA-4J Skyhawk through Congressional action in October 2000. After looking at various aircraft that were held in storage at AMARC, BuNo 153524 was selected because the overall condition of the aircraft and its low airframe hours. The TA-4J Skyhawk was disassembled in Tucson late summer 2004 and shipped by truck to the facilities of AvCraft in Myrtle Beach, SC. Reassembly, needed repairs and flight inspections were completed. In the early part of 2005, the aircraft flew from Myrtle Beach, South Carolina to Midland, Texas where it was repainted in the colors of Marine Squadron H&MS 11 “Playboys”. The Playboys were an all-volunteer group of pilots in Vietnam.

Despite the many regulatory obstacles, The Collings Foundation acquired the F-4D Phantom II by means of an amendment to the Defense Authorization Bill of 1999. The Collings Foundationís Phantom was one of several stored at the Davis-Monthan Air Force Base. A thorough 600 hour inspection was conducted, engines were replaced with zero-time units, avionics upgraded, hydraulic systems and components were overhauled, structural items tested and repaired, ejection seat CADS and PADS replaced, and much more.

The flight-training program takes place over a two-day period, at the Collings Foundation’s Houston, Texas campus. Each participant will take part in academic sessions on board the aircraft, which will include presentation safety procedures, ejection seat training and cockpit orientation, before donning a Nomex fight-suit and strapping into the most powerful civilian operated fighters in the world. Flights will be personally tailored to each student’s interests and capabilities and an opportunity to either fight, or fly, a MiG-21 is available. Contact Collins Foundation at 978-562-9182, www.collingsfoundation.org.