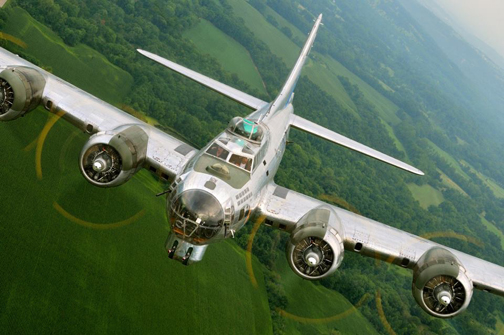 It sputtered like a seasoned smoker as the propellers started whipping around at full speed.

I was on board the “Sentimental Journey,” the Second World War Boeing B-17G Flying Fortress — owned by the Arizona Airbase of the Commemorative Air Force — on display this week at the Canadian Warplane Heritage museum, and was seriously wondering whether we’d even make it to the end of the tarmac for takeoff. The plane sounded like it was on its last legs.

As we sat in idle for 10 minutes before zooming off into the sky, I had time to quickly analyze the plane’s interior: it’s much louder than I’d imagined it to be; the cabin is full of natural light (this, I later found out, was so the crew members could see enemies approaching from nearly all directions during an airstrike); and the cabin space is far roomier than expected.

For the complete story and video by Justin Robertson of The Hamilton (Ontario) Spectator, click here.