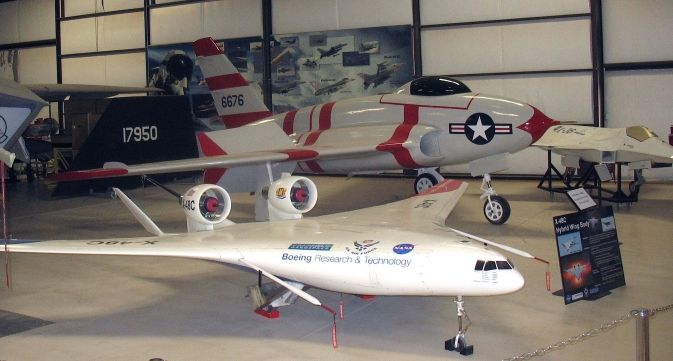 Story and photo by NASA

Museum staff and volunteers moved the Northrop X-4 Bantam and one of two General Dynamics F-16XL aircraft to the exhibit area on Aug. 9, 2013, and days later accepted the Boeing X-48C Hybrid/Blended Wing Body on loan while Boeing, NASA Dryden and the Air Force Research Laboratory pursue future flight opportunities for the remotely piloted research aircraft. Knowledge gained from flying these airplanes spans 65 years of aeronautical research ranging from 1948 through 2013.

“The museum’s mission is to preserve and display the history of all flight testing undertaken at Edwards,” said curator George Welsh. “These three new additions to the collection allow us the opportunity to educate the public on the long history of cooperation between NASA and the Air Force on some of the many joint research programs that have taken place here.”

The X-48 was flown 122 times in two different configurations between July 2007 and April 2013 to explore the low-speed handling qualities and stall characteristics of a blended wing body aircraft.

After serving as a prototype for an Air Force strike aircraft competition in the 1980s, the F-16XL, an experimental derivative of the F-16 with an advanced cranked arrow delta wing, was flown at Dryden in the 1990s to study phenomena associated with high-speed transport aircraft as well as the cranked arrow delta wing’s aerodynamics. It was last flown in 1999 following integration of a digital flight control system that replaced its original analog system, and last moved under its own power during a taxi test in June 2007. A two-seat, longer-fuselage version of the F-16XL that was used in a laminar airflow control research project at Dryden in the mid-1990s remains at Dryden temporarily pending eventual transfer to the National Museum of the Air Force.

First flown in 1948, The X-4 was designed for researching the flight characteristics of swept-wing, semi-tailless aircraft at transonic speeds (approximately Mach 0.85). Only two were built. The X-4 on display at the Edwards museum was only flown by a Northrop test pilot before being grounded after its 10th flight due to instability. It was then used as a source of spare parts for the second aircraft, which made 87 research flights flown by Northrop, Air Force and National Advisory Committee for Aeronautics test pilots.

The immaculately restored X-4 and the X-48 currently reside inside the AFFT Museum’s building on the base adjacent, while the F-16XL has joined other historic aircraft on display outside the facility.

The Air Force Flight Test Museum collection features a number of other research aircraft flown at NASA Dryden in past years, including a Boeing X-36, McDonnell-Douglas F-15A, a Lockheed F-104G, a General Dynamics NF-111A, and a Martin B-57B. The X-36 is on display adjacent to the X-48 and X4 inside the museum, while the F-104G is displayed outside. The F-15A, NF-111A and the B-57B are stored elsewhere on the base awaiting cosmetic restoration.