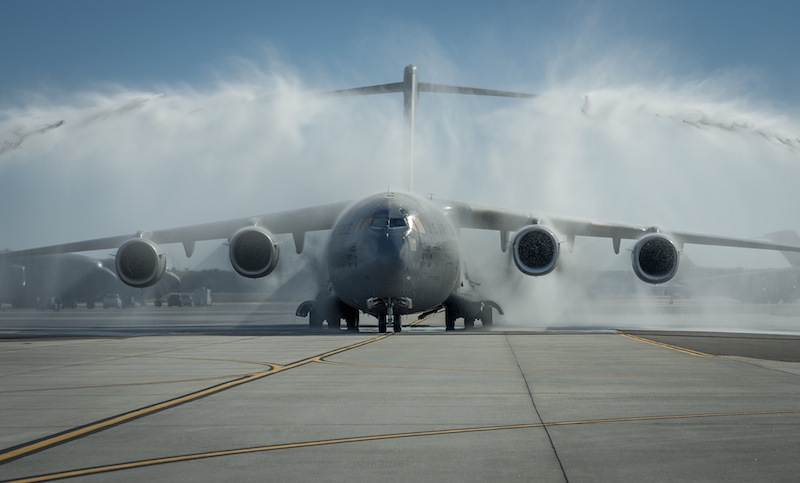 This achievement marks the first C-17 to reach this milestone, and to honor the achievement Team Charleston celebrated with a small ceremony Dec. 18, 2013, at JB Charleston – Air Base, S.C.

“Prior to an expected service life extension, a C-17 is estimated to fly 30,000 flight hours during its service,” said Norman Moore, 437th Maintenance Group deputy director. “Even though The Spirit of Charleston has been through two thirds of its expected run, it still has a long life ahead.”

“Today is an important milestone both for our Air Force and for aviation history in general,” said Col. Darren Hartford, 437th Airlift Wing commander. “And, while we celebrate this historical achievement, let us remember that this 20,000 hour feat has far less to do with the crafted aluminum, composites, and super alloys that make up the C-17 behind me, and everything to do with the brave men and women who fix, fill, and fly it, all over the world, every day, in service to our nation.”

“The Spirit of Charleston” career began upon its arrival at Charleston Air Force Base on Flag Day, June 14, 1993. The aircraft, 9192, spent its first two years at Charleston AFB being used for training of maintenance and aircrew personnel until its first call to action in 1995, during Operation Joint Endeavor in Bosnia and Herzegovina.

“During Joint Endeavor, 9192, along with other aircraft, was operating in the harsh, cold climate of western Europe in an actual combat environment while landing on unimproved runways,” said Moore. “The unique capabilities and maintainability made it a force multiplier that showed its potential of meeting future challenges.”

Future challenges quickly arose during Operation Scorpion I, II, III and IV from 1997 to 1998 (in response to Saddam Hussein’s defiance of not allowing weapons inspectors into Iraq), Operation Joint Guardian in 1999 (insertion of NATO peacekeeping forces into Kosovo) and Operation Allied Force in 1999 (NATO bombing in Yugoslavia.)

“The combat contingencies and humanitarian efforts were increased after the terrorist attacks on Sept. 11, 2001,” said Moore. “Those missions ranged from air-dropping food packets in 2001 during Operation Enduring Freedom, to Operation Anaconda in 2002, which was the first full-scale battle in Afghanistan against Al-Qaida; then Operation Iraqi Freedom in 2003, with the invasion of Iraq.”

Every step of the way, the C-17 fleet from Charleston, including “The Spirit of Charleston,” was at the tip of the spear, leading the way in air mobility.

“Aircraft 9192 has been around the world many times, for a variety of reasons, including many humanitarian efforts during natural disasters,” said Moore. “These missions include numerous relief efforts during Hurricane Katrina, Hurricane Sandy, the Haitian and Chilean earthquakes, the Japanese tsunami, flood ravaged Pakistan … and the list goes on.”

Moore added, “The Spirit of Charleston” has accumulated more than 20,000 flight hours and has been stationed at Charleston more than 20 years. However, it has been maintained and flown by personnel from McChord AFB, Wash., JB McGuire – Dix – Lakehurst, N.J., Dover AFB, Del., Travis AFB, Calif., JB Pearl Harbor-Hickam, Hawaii, Elmendorf AFB, Ala. and other bases around the world. It will continue in the Air Force inventory for decades to come as a viable deterrent against enemy aggression as well as a sign of hope for those in need.

“The consistent excellent efforts of our Airmen made this milestone possible,” said Col. James Fontanella, 315th Airlift Wing commander. “This accomplishment was truly a total force effort. I expect the C-17 to continue its dominance as the Air Force’s premier strategic airlift.”

The milestone of reaching 20,000 flight hours is a testament to much more than one aircraft, but also to the efforts of countless Airmen along the way who ensure each aircraft in the AMC inventory is capable and mission ready at a moment’s notice. According to Moore, none of this would be possible without the hard work of the maintenance workers who keep the mission moving every day.

“This achievement is a win for everyone at JB Charleston,” said Moore. “We’re a team, and without the maintainers working in extreme weather conditions; from 2 a.m. and frigid winter conditions with freezing hands, to the blistering summer months with more than 100 degree temperatures. They are out there working in all environments, and without them, the mission wouldn’t be possible.”

“This is about much more than one aircraft reaching 20,000 flight hours,” said Moore. “This milestone represents the Air Force’s entire C-17 fleet. It shows the world that at any time, for any reason, when a C-17 is involved, a yellow Charleston tail flash will be on the aircraft that leads the way.”

“I am both humbled and proud to be a part of such a monumental milestone for the C-17, but more importantly, for the men and women of Joint Base Charleston.” said Hartford. “While 20,000 hours is a tremendous feat for any airframe, it is a truer testament of the blood, sweat and tears of all the Airmen in the 437th and 315th. I would like to commend all those past, present and future Airmen who make our mission possible. Safe, precise, reliable. 20,000 hours and beyond.”