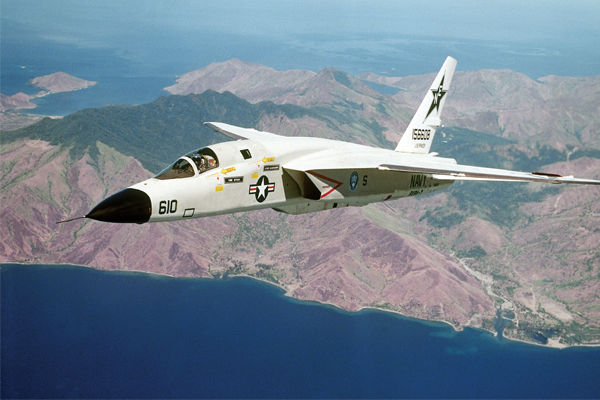 RA-5 Vigilante: Going to war with a camera

The Vigilante was doing 650 knots near the North Vietnamese port of Hon Gai when there was a huge explosion behind the tail from either heavy caliber antiaircraft fire or a SA-2 missile.

On fire and with the flight controls failed, the crew, Lt. Cdr. James Bell, pilot, and Lt. Cdr. “Duffy” Hutton, RAN, ejected and landed in the small islands off the coast. They both climbed into their survival rafts, but were picked up by fishermen in sampans and became POWs. (After repatriation in 1973, Bell told of being tied to the sampan’s mast which struck him as ironic as the night before he had watched the 1946 movie Two Years Before the Mast.)

By October of 1965, the air war was hot. The first SAMs had been launched that summer and their locations were a high priority. The Vigilante from squadron RVAH-1 “Smoking Tigers” off USS Independence (CVA-60) had been searching for the distinctive six-sided launching sites when it was hit.

To read more, click the link to open the PDF: Unarmed and Unafraid