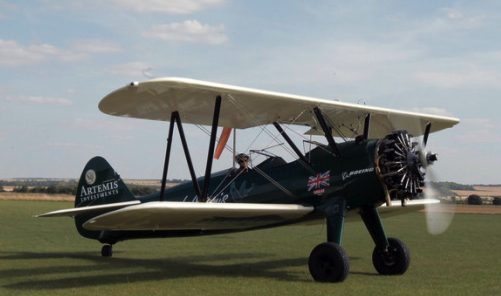 With support from Boeing, pilot Tracey Curtis-Taylor has taken off on a 7,000-mile solo journey, in a reconditioned Boeing Stearman open-cockpit biplane, to retrace Lady Mary Heath’s historic 1928 flight between South Africa and the United Kingdom.

Heath was the first pilot, male or female, to make such a journey. Curtis-Taylor, a UK-based pilot, departed Cape Town on Nov. 2 with plans to land in Goodwood, near London, in December. She is flying a refurbished 1942 Stearman named Spirit of Artemis, after sponsor Artemis Investments.

“We hope this journey inspires people along the route to learn more about the remarkable history of aviation and the role Boeing has played in the past, as well as the important role we play in African aviation today,” said Boeing Military Aircraft President Chris Chadwick.

More than 8,500 Stearmans were built in the U.S. during the 1930s and 1940s. The airplane was the primary trainer for the U.S. Air Force and Navy during World War II.