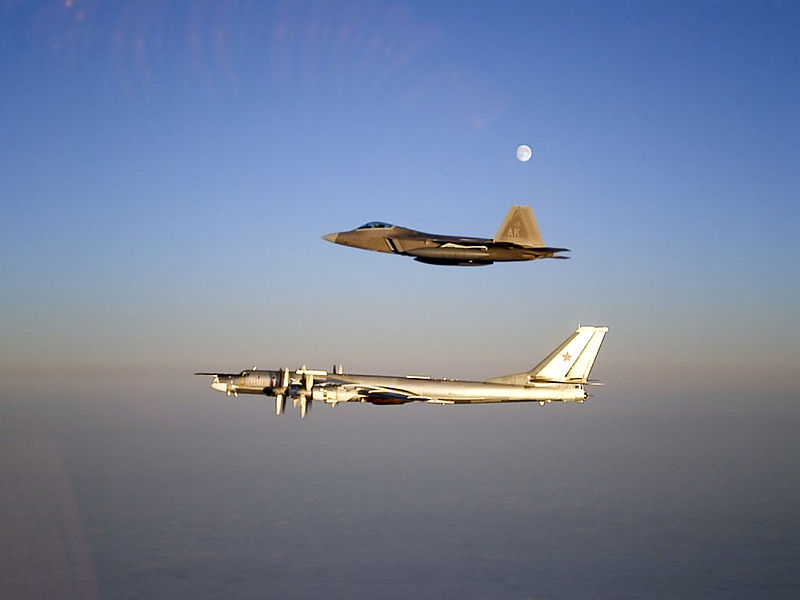 Beginning Tuesday, fighter jets from the North American Aerospace Defense Command and the Russian air force will scramble to track and intercept “hijacked” aircraft during an air defense exercise viewed as a steppingstone toward closer military-to-military cooperation in additional areas.

Vigilant Eagle 13 kicked off Aug. 26, with scenarios that present the United States, Canada and Russia with a common enemy: terrorist hijackers, Joseph Bonnet, director of joint training and exercises for NORAD and U.S. Northern Command, said during a telephone interview with American Forces Press Service.

The exercise is the fifth in a series, based on a 2003 agreement between the sitting U.S. and Russian presidents to strengthen the two militaries’ relationship and their ability to work together. The threat of international hijackers served as a foundation to help advance that effort, resulting in an exercise program that addresses a recognized threat, Bonnet explained.

This year’s exercise is the third in the series to incorporate actual aircraft, Bonnet reported. A Russian Tupolev and a commercial aircraft contracted by the U.S. will simulate commercial airliners seized by terrorists. The U.S. Air Force’s Airborne Warning and Control System and Russia’s A-50 Beriev will serve as command-and-control platforms.

Live fighter jets — Canadian CF-18 Hornets and Russian Sukhois — will track, identify, intercept and follow the hijacked aircraft, and both Canada and Russia will conduct air-to-air refueling operations. The Canadian air force has been integral to past Vigilant Eagle exercises, but is contributing aircraft for the first time this year, Bonnet said.

In addition, the Federal Aviation Administration and its Russian equivalent are participating.

The scenario involves two “hijacked” commercial aircraft that challenge participants on the ground and in the sky to provide a coordinated response, Bonnet explained. The first flight, to originate tomorrow from Anchorage, Alaska, will travel into Russian airspace. The following day, a Russian aircraft will take off from Anadyr, Russia, toward U.S. airspace.

When the aircraft fail to respond to communications, NORAD, the U.S.-Canada command that safeguards U.S. skies under Operation Noble Eagle, and the Russian air force will move into action. Both will launch or divert fighter jets to investigate and follow the suspect aircraft headed toward each other’s airspace. At that point, they will hand off the missions to each other to complete.

Working together in Anchorage and Anadyr and at the NORAD headquarters in Colorado Springs, Colo., participants will cooperate in escort and handoff procedures using two distinct communications, command-and-control and air traffic control systems, Bonnet said.

Vigilant Eagle has become more ambitious and valuable with each iteration, Bonnet said, noting that this year’s exercise will be no different.

“This is the culmination of everything that has gone on in previous exercises, and we expect it to continue to mature,” he said. “Like us, the Russian Federation air force is eager to expand the scope and complexity of the exercise, and to look into other areas,” such as related search-and-rescue and airfield operations.

Bonnet called continuation of Vigilant Eagle, particularly at a time when budget costs have caused the cancellation of many other exercises, a success in itself. With fewer than 100 people directly involved from the United States, Vigilant Eagle offers tremendous “bang for the buck,” he said.

“This is a small, relatively inexpensive exercise with a huge payoff,” he said. “It doesn’t cost any of the countries a lot of money, but it is building things that have immediate value for all of them. When you have procedures and a means of communicating information between both sides, that has a lot of value.”

Another big success, Bonnet said, is that the exercise has transcended leadership changes both in the United States and in Russia, as well as recent political tensions between them.

Both countries recognize the importance of continued cooperation to keep their international borders safe, he said.

“It is one of the biggest single areas where the Russian Federation, U.S. and Canada can truly cooperate,” he said. “All three countries share a common objective in thwarting, combating and cooperating against terrorism.”

As their militaries work together to confront terrorist hijackers, Bonnet said, they are laying the foundation for future cooperation in other areas.

“What we are trying to do is continually build and expand the exercise and use this as a basis for moving the relationship forward,” he said. “That, to me, is the biggest value of Vigilant Eagle.”