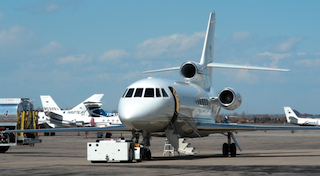 A small American executive plane left Iran Sunday after it was repaired following an emergency landing at an Iranian airport this month, state TV reported. The Dassault Falcon 900 was forced to land 16 days ago at the airport of the southern city of Ahvaz due to technical failure, Mahmoud Rasoulinejad, head of the state-owned Iran Airports Company, told the TV station.

Rasoulinejad said three passengers left Iran for Arab countries in the Gulf, but the jet remained under repair in the airport. He said the plane took off from Iran Sunday upon arrival of needed spare parts and completion of repairs.

It was not clear why the announcement of the plane’s landing was not made earlier. Iran is a member of the International Civil Aviation Organization, or ICAO, which requires members to come to the aid of civilian aircraft when requested.

For the complete story by Nasser Karimi of The Associated Press, click here.