ATLANTIC OCEAN (NNS) — USS Abraham Lincoln (CVN 72) was the first kid on the block to get a new ATARI. No, not the iconic gaming system from the 80s, but a system designed to remotely land aircraft on a carrier. Abraham Lincoln’s friends, the other carriers, should be jealous. ATARI, or aircraft terminal approach remote inceptor, was, for the first time ever, successfully demonstrated during a touch-and-go on an aircraft carrier while conducting carrier qualifications and flight testing aboard Abraham Lincoln. ATARI gives Landing Signal Officers (LSOs) the ability to take over and maneuver aircraft during recovery operations.

“I was really impressed with LSO’s ability get me to touch down,” said Lt. John Marino, a carrier suitability pilot from the “Salty Dogs” of Air test and Evaluation Squadron (VX) 23, and the first pilot to land on a flight deck using ATARI. “The conditions were really varsity (difficult), and it was really impressive the system worked the way it did. On a calm day, it would have been a little bit boring, but this was definitely more challenging.”

Developed at Naval Air station Patuxent River, Maryland by Naval Air Systems Command (NAVAIR), ATARI was originally been tested in a Learjet in 2016, performing shore-based low approaches. In 2017, F/A-18s were fitted with this technology and after extensive testing and quality assurance, VX-23 was confident enough to test their system at-sea. “There was some nervousness because the sea state was so bad,” said Marino. “Back on the airfield, testing was benign.” 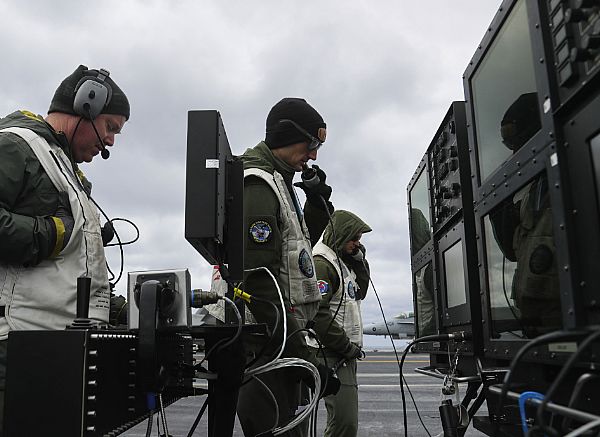 LSOs are capable of taking over an aircraft from up to five miles away using the ATARI. The system demonstrates a potential method for recovering an unmanned aerial vehicle (UAV) by using the LSO’s ability to observe and fix glideslope and lineup errors. Though not intended to be a primary method for recovering aircraft, it does provide a relatively inexpensive backup system in the case and an LSO needs on to step in and use their expertise and training to safely guide an aircraft. Along with the ATARI, a van outfitted with the ATARI system was brought aboard and setup behind the LSO platform to allow the engineers to watch the approaches in real-time, monitor safety-of-flight data and ensure passes were going smoothly. The van recorded flight data for engineers to analyze later and allowed VX-23 to test their system without having to install it Abraham Lincoln.

“We don’t have unmanned carrier-based vehicles in the fleet today, but they are coming soon, said Dan Shafer, a NAVAIR air vehicle engineer. “This is a potential alternative landing method and our system performed well.” Much like its namesake, ATARI uses a joystick to control a UAV, or in this case for testing purposes, an F/A-18 outfitted with the system and a safety pilot sitting in the cockpit. The LSOs use the joysticks to make corrections and safely land the aircraft on the flight deck.

“We took the guy who’s flying the aircraft and we moved him to the LSO platform,” said Buddy Denham, a senior engineer at NAVAIR and creator of ATARI. “You’re effectively using little joystick controllers to guide a 40,000 lbs. airplane, and it’s almost like you’re playing a video game.” Prior to landing, the aircraft first had to perform three wave-offs to ensure all conditions were safe and the system could indeed take over the aircraft while-at sea. On the fourth approach, the system engineers and LSOs felt comfortable doing touch-and-goes.

“The deck was pitching significantly and yawing and rolling,” said Denham. “It was particularly difficult to land that day, and we showed it’s possible to use this system even when the conditions aren’t ideal.” The ATARI testing was conducted over the course of two days in conjunction with carrier qualifications. Though not currently slated for fleet-wide implementation, yet the successful give it potential for future application. The ATARI engineers will analyze the data collected aboard Abraham Lincoln and make adjustments for further at-sea testing.