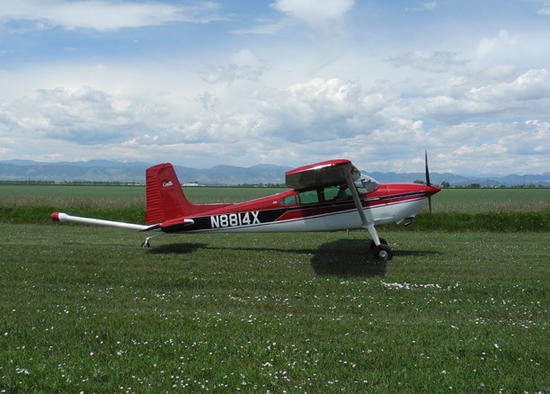 Beginning today and continuing for about a month, a Cessna 182 operating under contract to the U.S. Geological Survey will be making low-level flights over a 1,400-square-mile area over parts of Arkansas, Missouri and Tennessee to measure the earth’s magnetic field.

Blytheville, Ark., Kennett, Mo., Piggott, Ark., and Qulin, Mo., along with other parts of southeastern Missouri, northeastern Arkansas, and western Tennessee will be overflown by the plane, which is equipped with a magnetometer. These flights are part of an ongoing USGS earthquake research program to identify hidden geologic features, such as changes in rock types, thus providing a better understanding of the geology and hydrology of the area. For example, the magnetic survey may help map shallow concealed faults associated with the New Madrid seismic zone. It will take several months to a year before results from the survey are released.

“Faults sometimes bring together rocks with different magnetic properties,” said Dr. Richard Blakely, the USGS geophysicist who organized the survey and will lead data analysis. “These variations in magnetic properties produce very small magnetic fields that can be measured with low-flying aircraft, allowing us to map and characterize faults even though they may be completely hidden by vegetation or young sediments.”

For the last 40 years, the New Madrid area has been the most seismically active region in the United States east of the Rocky Mountains. Although no knowledge of an imminent large earthquake exists, the USGS has serious concerns about the potential repeat of a destructive earthquake in the New Madrid seismic zone, like those that occurred in the winter of 1811-1812. Large sequences of earthquakes with magnitudes ranging from 7 to 8 also occurred in this region in about 1450 A.D., 900 A.D., and 2300 B.C. The geologic evidence indicates that these were large earthquakes that produced prolonged and very strong ground motions in the area that is home to several million people today.

Anyone observing the low-flying single-engine Cessna red and white airplane should not be alarmed if they see it fly overhead or pass below the horizon. The airplane is operated by experienced pilots who are specially trained for low-level flying.

The airplane is operated by EDCON-PRJ of Lakewood, Colo., which is working with the Federal Aviation Administration to ensure flights are safe and in accordance with U.S. law.

Story and photo by U.S.G.S.