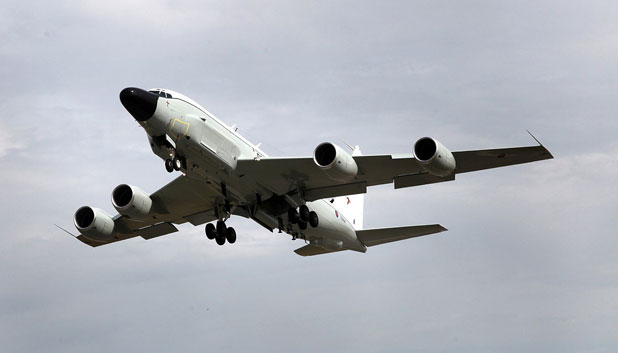 The first Boeing RC-135W Rivet Joint intelligence-gathering aircraft for the Royal Air Force (RAF) has been delivered to its main operating base at RAF Waddington.

The aircraft – ZZ664 – arrived at Waddington on Nov. 12 after a flight from Majors Field, Greenville, Texas via Bangor, Maine. The aircraft, which was converted from a 1964-vintage KC-135R tanker is the first of three RC-135s destined for the RAF under the Airseeker program, filling the capability gap in electronic and signals intelligence gathering left open by the retirement of the Nimrod R1 in 2011. The RAF is the first export customer for the Rivet Joint, and the $1 billion program is considered to be one of the most complex Foreign Military Sales purchases ever completed between the U.K. and the U.S.

ZZ664 was rolled out of L-3’s facilities in Greenville, Texas, in early May and made its first post conversion flight at the end of July. According to RAF officials, the aircraft achieved its flight trials ahead of schedule, allowing it to be delivered early.

For the complete story by Anthony Osborne of Aviation Week, click here.