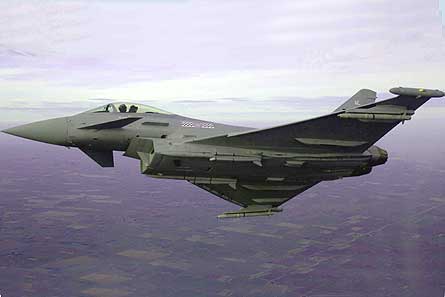 Story and photo by Flightglobal

The Royal Air Force has debuted its latest standard of the Eurofighter Typhoon at a Red Flag-series exercise at Nellis AFB, Nevada.

Flown by 6 Squadron pilots from RAF Leuchars in Scotland, the Tranche 2-standard aircraft, plus support personnel from the unit and the RAF’s 1 Squadron, took part in the Red Flag 14-1 exercise that began late last month and ended last Friday. The Typhoons were operated in the air-to-air role.

As 2014 progresses, the Tranche 2 Typhoons of the Leuchars wing will progressively work with the multirole P1E upgrade, which includes the addition of capabilities with the Rafael Litening III targeting pod and Raytheon Systems Paveway IV precision-guided bomb. The aircraft will also be relocated to RAF Lossiemouth.

The RAF also sent Tranche 1 Typhoons from its 11 Sqn to participate in a Red Flag exercise last year, and intends to return to Nellis in early 2015 for a full test of its Tranche 2 capability.