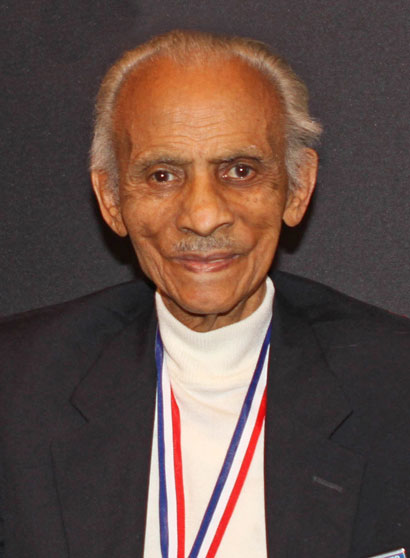 Retired U.S. Air Force Col. Herbert E. Carter died Thursday at East Alabama Medical Center in Opelika, Ala. He was 95. Carter was a university alumnus and member of the original cadre of the 99th Fighter Squadron of the famed Tuskegee Airmen. He flew combat missions during the North African, Sicilian, Italian and European campaigns of World War II.

“Col. Carter’s entire life was an inspiration to generations of students not only at Tuskegee University but also to youth and adults throughout the United States, Europe, Africa, Latin America and Asia,” said Tuskegee University president, Gilbert L. Rochon. “He fought for freedom from tyranny internationally and for freedom from discrimination at home in America. His commitment to excellence and determination to succeed will set the standard for the next generations of Tuskegee Airmen.”

Carter also served as a professor of air science and commander of the Air Force ROTC Detachment 15 at Tuskegee Institute (now Tuskegee University) from 1950 to 1955 and professor of aerospace studies from 1965 to 1969.

Carter earned a bachelor of science degree in 1955 and a master’s degree in education in 1969 from Tuskegee Institute. After his retirement from the Air Force, he served at Tuskegee as assistant dean for student services and associate dean for admissions and recruiting.

“Col. Carter has left a great legacy not only for Tuskegee University’s AFROTC detachment, but the United States Air Force. The Air Force’s core values of integrity first; service before self; and excellence in all we do are the values the Tuskegee Airmen portrayed in winning a victory against fascism abroad and racism at home,” said Kelly Primus, commander of the Tuskegee University Air Force ROTC.

Carter was one of several original Tuskegee Airmen who returned to Tuskegee University to celebrate the film premiere of “Red Tails” in January. Produced by George Lucas, the movie mogul behind “Star Wars” and “Indiana Jones,”  “Red Tails” portrayed the experience of the airmen during World War II. Primus said Carter remained a familiar figure on campus, even during his later years.

“He had spoken to our cadets numerous times about the Tuskegee Airmen’s plight and how they became the “best of the best.” He also reminded them that, as future officers, they must portray the core values and continue to keep airmen’s legacy alive,” Primus said.

On June 6, 2004, the president of the French Republic, Jacque Chirac, announced that Carter had been chosen for the Chevalier of the Legion of Honor, France’s highest civilian award. The award was for “outstanding service rendered France during the second World War.”

In February, Gen. Martin E. Dempsey, the 18th Chairman of the Joint Chiefs of Staff, paid tribute to the Tuskegee Airmen during a visit to the university.  He presented Carter with the Outstanding Leadership Award.

“Who will put their lives at risk? Who will work to help others? Col. Carter did that for his generation,” Dempsey said during the presentation.

Some of Carter’s professional affiliations include the Presidential Scholars Review Committee, American Association of Collegiate Registrars and Admissions Officers. He was a former member of the Board of Trustees of St. Andrews School (St. Andrews, Tenn.) Since 1984, Carter had served as a consultant for Student Recruitment and Admissions, College Board, Educational Testing Service. He also served as the president of the Tuskegee chapter of Tuskegee Airmen Inc.

Carter was married for more than 60 years to Mildred L. Hemmons Carter, a pilot who was also counted among the Tuskegee Airmen. Mildred Carter died in October 2011.

In remembrance of Carter, the American flag near the Gen. Daniel “Chappie” James Center for Aerospace Science and Health Education will be lowered to half staff. Also, there will be a moment of silence during an Air Force cadet dinner scheduled for tonight. Funeral arrangements for Carter have not yet been announced.