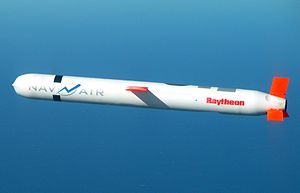 Named after the Tomahawk, a one-handed axe used as a tool and a weapon by pre-contact Native Americans, the Tomahawk is a long-range, all-weather, subsonic cruise missile. Introduced by McDonnell Douglas in the 1970s, it was initially designed as a medium to long-range, low-altitude missile that could be launched from a surface platform. It has been improved several times over the years, and after many corporate acquisitions, is now made by Raytheon. Some Tomahawks were also manufactured by General Dynamics (now Boeing Defense, Space & Security).

A major improvement to the Tomahawk is network-centric warfare-capabilities, using data from multiple sensors (aircraft, UAVs, satellites, foot soldiers, tanks, and ships) to find its target. It will also be able to send data from its sensors to these platforms. It will be a part of the networked force being implemented by the Pentagon.

In response to a deadly chemical attach, they recently were used in a missile strike against Syrian, approximately 60 U.S. Tomahawk missiles hit the Shayrat air base, southeast of Homs, a small installation with two runways, where aircraft often take off to bomb targets in northern and central Syria. The U.S. missiles hit at 3:45 a.m. (0045 GMT) Friday morning and targeted the base’s airstrips, hangars, control tower and ammunition areas.