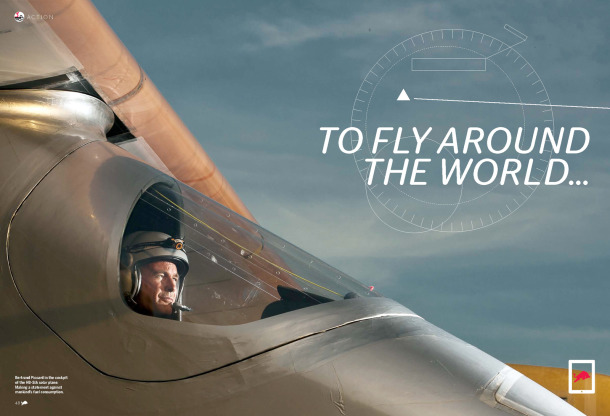 Bertrand Piccard squeezes himself into the narrow cockpit of his solar-powered plane and feels like a prisoner. There’s not a lot of room in there. He can barely move. An engineer has to climb up to him to hook him up to an on-board computer.

Piccard, 54, is wearing a life jacket over insulated overalls to protect him from the cold. He has a parachute on his back. On the wing above him, 10,748 solar cells soak up the evening sunlight.

Piccard’s plane, codename HB-SIA, has a wingspan of 208 feet, the same as an Airbus A340. Yet he is huddled in a cockpit half the size of a telephone box. “You can’t see the wings at all,” he says of his pilot’s view. “You’re sitting in there like a horse wearing blinders.”

Five assistants push the plane into position with their bare hands. At 3,500 pounds, the highest-performance solar-powered plane in the world weighs the same as a medium-sized car. When the pilot gets in the cockpit, the carbon-fiber wings tremble all the way to their tips.

The nearby Payerne weather station is reporting winds of four knots (4.6 mph), a light breeze wafting over this military base 30 miles southwest of Bern in Switzerland. Piccard looks out onto the horizon through his rimless glasses. The fire brigade position their fire engines on the edge of the runway. This is his third Solar Impulse test flight this year.

“IF WE CAN FLY AROUND THE WORLD WITHOUT USING A DROP OF KEROSENE, WE CAN ALSO DO WITHOUT FOSSIL FUELS ON OUR ROADS.”

The day before the test flight, Piccard is sitting on a white sofa in the hangar in Payerne. His most striking facial feature is the steely blue eyes he fixes on everyone he talks to. He is a third-generation adventurer. In 1931, his grandfather, Auguste, became the first man to reach the stratosphere in a balloon, and in 1960 his father, Jacques, was the first man to descend almost seven miles into the Mariana Trench. The film director James Cameron was the last person to do so, in March 2012.

“I was raised to be curious,” Piccard says. In 1999, he became the first person to circumnavigate the globe nonstop in a hot-air balloon. He needed three attempts before finally landing in the Sahara after flying a distance of 26,600 miles. On his first attempt he fell into the Mediterranean. On his second attempt he had to come down in Burma. “I realized then how dependent [humans] are on liquefied petroleum gas,” he says.

The Swiss native hopes that his Solar Impulse project will make a statement against mankind’s fuel consumption, but without wagging fingers. “No one wants to give up their comfortable lifestyle. But why would we have to? Clean technologies already exist and have huge potential. If we can fly around the world without using a drop of kerosene, we can also do without fossil fuels on our roads.”

The first circumnavigation of the globe by solar-powered plane, in a five-stage flight, is planned for 2014. In Dübendorf, near Zurich, Solar Impulse engineers are currently poring over the successor to HB-SIA. The electronic components need to be better protected against the rain. The wingspan will increase by 26 feet and provide room for yet more solar cells.

The HB-SIA plane can already remain airborne night and day thanks to its ingenious storage technology. While the sun is shining, lithium polymer batteries collect energy that can be used for flying at night. The clock starts ticking when it gets dark. You have to be able to fly until sunrise, which is when the batteries go flat. Pilots must fly in an energy-efficient way at night, which means as much gliding and as little propeller use as possible.

Solar Impulse can carry only one pilot, and it will take between 25 and 30 days to fly around the world. As no single person could last that long, Piccard will be swapping places in the cockpit with Swiss countryman André Borschberg. With his short hair and lively eyes, the gangly, 59-year-old Borschberg looks about 10 years younger than he actually is. You can imagine him as a flight-school instructor, standing in the classroom in his aviator sunglasses explaining maneuvers to the wannabe daredevils. Borschberg got his pilot’s license when he was only 17, before ever laying a finger on the steering wheel of a car. After that he flew fighter jets for the Swiss army for 20 years and then set up his own technology firm.

THE PROJECT HAS NO CONTINGENCY PLAN FOR AN EMERGENCY LANDING ON WATER. THE LIGHT AIRCRAFT WOULD SMASH TO PIECES ON CONTACT.

Piccard says Borschberg is a workaholic. Borschberg says Piccard is a visionary who sees things differently from most of the people around him. What would make a former fighter pilot who flew at Mach 1 for decades take an interest in flying around the world at 40 mph?

“It’s a completely new type of flying,” says Borschberg. “In an F/A-18 [jet fighter], it’s like you’re flying two kilometers [approx. 1.25 miles] behind the jet. The controls react so quickly that you really have to keep up with the distance in your head. In the Solar Impulse cockpit, on the other hand, it’s all about patience. You steer to the right and at first nothing happens, and then you turn.”

Borschberg also wants this round-the-world flight to promote solar technology. “When I flew from Switzerland to Belgium last year, I had more energy in the battery at landing than at takeoff. We could have dispensed with some of it. It was mind-blowing.”

Borschberg set three records for solar-powered planes on board the HB-SIA in 2010: the longest flight (26 hours, 10 minutes) with the highest absolute flying altitude (30,298 feet) and the greatest height gain (28,687 feet). Yet both pilots know that the greatest challenge facing them is a mental one.

If Piccard and Borschberg are to cross the oceans, they will have to remain in the air for 150 hours nonstop. In that time, you could fly from Paris to New York around 16 times in a passenger plane. The Solar Impulse pilots have to get through the marathon stage over the Atlantic without a break. In a mini-cockpit. In a plane that steers like an oversized paraglider.

The project has no contingency plan for an emergency landing on water. The light aircraft would smash to pieces on contact. “We’ve got parachutes,” Piccard says. If the plane were to go down over the ocean, it’d be a case of bailing out and waiting to be rescued by boat.

Piccard also says that panicking is often a lot more dangerous than the actual risk: “Too many emotions then come rushing to mind and get in the way of your decision-making.” But pilots are trained to deal with panic.

THE PILOTS ARE ALLOWED TO SQUEEZE IN “MICRO-NAPS” OVER UNINHABITED AREAS. AUTOPILOT TAKES OVER DURING THESE SHORT SLEEPING BREAKS.

Borschberg, the former military pilot, says he flies every mission in his head at home before going to sleep. He tries to visualize every maneuver in the plane. He demonstrated his stamina at the project’s research facility in Dübendorf in February of this year, when he completed a long test in the flight simulator.

His mission was a 72-hour virtual test flight, alone in an artificial cockpit. Medics and engineers communicated with him only by radio. Borschberg went on Twitter during the test. His tweets read like building blocks in a personality profile:

February 21, 17:27: First 10 hours in the cockpit are very fine. Starting to get used to my environment and lonelyness [sic]

February 22, 15:08: Used for the first time the toilet on board. Needs careful manipulation but it worked… (In case you’re wondering, the pilots use a toilet installed in the seat, otherwise known as a plastic bottle.)

February 23, 12:12: Getting used to my sleep pattern, think i found the right times to do my micro naps. Full of energy

February 23, 13:56: No more hot water, no energy to heat up water, i will eat cold today, snacks, dry fruits and right now a taboule [sic]

Borschberg popped out of the simulator after three days. “There were people in the team who were worried he was going to collapse as soon as we took pictures of him,” says Piccard. “I never doubted André for a second.”

During the simulation, Borschberg did leg exercises to stay active and avoid getting thrombosis in his legs. On 32 occasions he had 20-minute naps. The pilots are allowed to squeeze in “micro-naps” over uninhabited areas. Autopilot takes over during these short sleeping breaks. The alarm goes off after 20 minutes. “Yoga and breathing exercises help you get to sleep exactly when you want to,” Borschberg says. Piccard prefers self-hypnosis.

When things get serious in 2014, the pilots will set off around the world in an easterly direction. One will be in the plane, the other on the ground. They’ll have a radio connection. Piccard will give Borschberg words of encouragement when his partner is sitting in the cockpit at an altitude of 26,000 feet, where outside temperatures are in the region of -40 F, with only heating pads and insulation for protection. When wind gets hold of the plane’s wings, the pilot only has his own strength to fight it: There are no hydraulics, on energy-saving grounds.

The first intercontinental flights are penned in for May and June 2012. Solar Impulse is due to take off from Payerne before crossing the Mediterranean and landing in Morocco.

At Payerne for the third test flight of 2012, Piccard starts the HB-SIA’s engines. Dozens of curious onlookers stare at the delicate aircraft. It’s 5:30 p.m. and the sun is low. Swiss army fighter jets regularly thunder down this runway, but when the solar-powered plane takes off, there is merely the whir of four 10 hp propellers. Piccard quickly gains height in the first few feet because the plane is so light. It looks like a huge bird hovering in the sky. In a world polluted with noisy, fast-paced living, this means of conveyance seems almost a provocative act; Solar Impulse flies at a leisurely pace. It is quiet and clean. Just over 10 minutes later, Piccard’s plane is nothing but a brushstroke on the horizon.