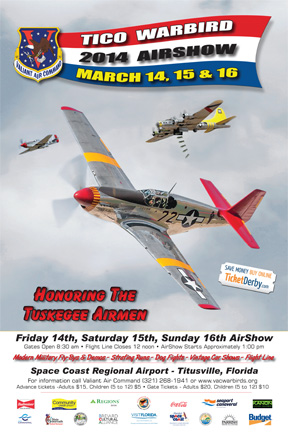 The Valiant Air Command will host the 37th Annual TICO Warbird Airshow next weekend in Titusville, Fla. This year’s program, to be held March 14-16, will be a special tribute to the Tuskegee Airmen and the missions they flew in their “Red Tail” North American P-51 Mustangs protecting U.S. bombers in Europe during World War II.

Loaded with entertainment for the whole family, each day’s activities will include a three-hour aerial performance by over 40 aircraft from World War I, World War II, Korean and Vietnam flying formations and demonstrations of parachute jumps and simulated dog fights.

Additionally, military and civilian aircraft will be on display and military re-enactors and firepower will be demonstrated.

For the complete story by Space Coast Daily, click here.