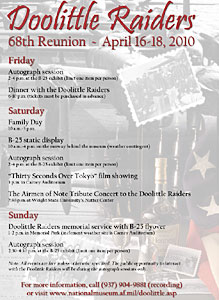 DAYTON, Ohio ó A limited number of tickets for a dinner with the Doolittle Tokyo Raiders during their 68th Reunion will go on-sale to the public on March 1 at 9 a.m. The dinner, which will be held on April 16 in the National Museum of the U.S. Air Forceís Modern Flight Gallery, will begin with cocktails at 6 p.m. and seating for dinner at 7 p.m. The cost is $65 per ticket.
download the flyer here.

Tickets can be purchased by obtaining an order form online at http://www.nationalmuseum.af.mil/doolittle.asp, by phone at (937) 904-9881 or in person at the museumís information desk. Order forms must be returned with payment to the museumís Special Events division and will be processed in the order that they are received. Payment will only be accepted by check or credit card (Discover, MasterCard or Visa). Those who purchase tickets will receive them by mail.

Other events planned during what could possibly be the Raidersí last major public reunion include three autograph sessions, a memorial service and B-25 flyover at the National Museum of the U.S. Air Force, and a tribute concert by the U.S. Air Force Band ensemble ìThe Airmen of Noteî at Wright State University’s Nutter Center.

In addition, the museum’s Family Day programs will feature the Doolittle Tokyo Raid, and the film Thirty Seconds Over Tokyo, will be shown in the museum’s Carney Auditorium on April 17.

As a special tribute to the Raiders during the reunion, the Doolittle Tokyo Raiders Association, Inc. is hoping to secure enough sponsorship funding to fly in and land 25 B-25 Mitchell bombers on the runway behind the museum. If their efforts are successful, this aviation event would be the largest gathering of B-25s since World War II. To date, 12 B-25 bombers have agreed to participate.

Those interested in helping to make this flight of B-25 bombers possible should contact Tom Casey with the Doolittle Tokyo Raiders Association, Inc. at (941) 921-7361 or by email at: tomcat911@comcast.net. (Federal endorsement is not implied.)

On April 18, 1942, 80 men achieved the unimaginable when they took off from an aircraft carrier on a top secret mission to bomb Japan. These men, led by Lt. Col. James H. “Jimmy” Doolittle, came to be known as the Doolittle Tokyo Raiders.

The National Museum of the United States Air Force is located on Springfield Street, six miles northeast of downtown Dayton. It is open 9 a.m. to 5 p.m. seven days a week (closed Thanksgiving, Christmas and New Yearís Day). Admission and parking are free.