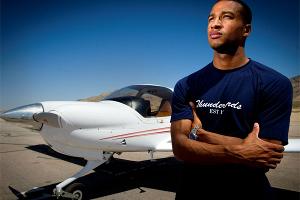 Growing up around small planes, it’s no surprise that 23-year-old U.S. Air Force Staff Sgt. Ben Ayivorh, a dedicated crew chief assigned to the USAF Air Demonstration Squadron at Nellis Air Force Base in Nevada, developed an interest in aviation at an early age.

However, aside from his day-to-day job of maintaining aircraft, this Burke, Va., native spends his spare time as a pilot.  “I have been flying as long as I can remember,” Ayivorh said. “My dad used to put a child seat in the airplane to take us flying.”

Ayivorh said his father, born in Ghana, Africa, immigrated to the U.S. in the early 1970s and had a dream of becoming a pilot.

“He made his dreams his goal and succeeded,” Ayivorh said. “Knowing what he went through to make his dreams a reality, I think my father made it a point to share what it was like to fly with me.”