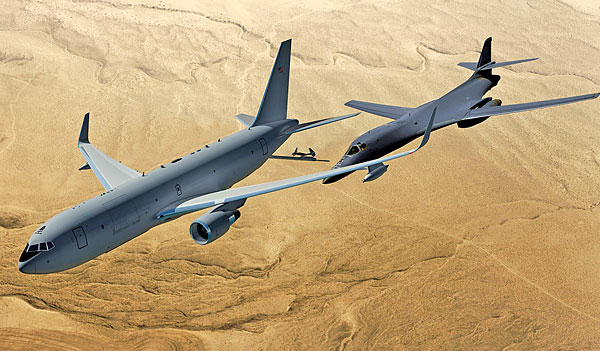 The Boeing Airplane Company won the KC-X competition the first time it was held more than 10 years ago, but the contract was rescinded due to high program leasing plan costs and heavy lobbying by the European Aeronautic Defense and Space Company (EADS). The second time around, EADS won the KC-X competition in February 2008, and its tanker was designated KC-45A. Boeing successfully lobbied to have the contract overturned, which created a third competition. Boeing has now won the long-running, often turned-over U.S. Air Force KC-X competition for the next-generation tanker transport and will build the airplane at its Everett, Washington, facility. The KC-X program now enters into the engineering and manufacturing development (EMD) phase. The aerial refueling tanker is designated KC-46A, and the first deliveries of 18 combat-ready tankers is to be by 2017. Boeing says that the KC-46A will support 50,000 jobs and 800 suppliers across 40 states.

The USAF Air Mobility Command wants to buy 179 of these new tankers to replace its aging fleet of Boeing KC-135 Stratotanker aircraft. The final cost of these 179 airplanes is estimated to be about $35 billion. The KC-46A is to be a modified Boeing 767-200ER jetliner based upon Boeing’s successful KC-767 program that already provides tankers to the air forces of Japan and Italy. The airplane will be powered by two fuel-efficient 60,000-pound-thrust turbofan engines to give it a cruise speed of about 550mph at 35,000 feet.—Steve Pace