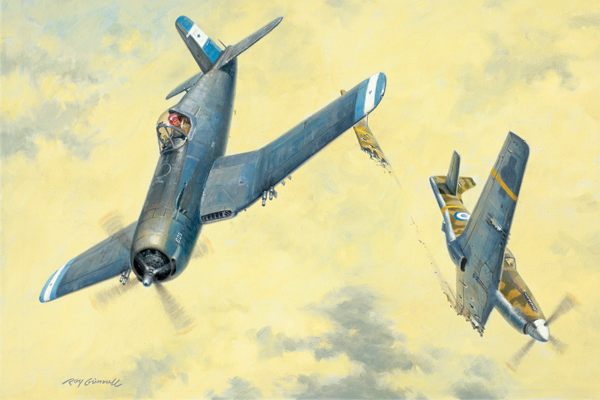 I was seated in first class enjoying a cocktail at 33,000 feet, looking west at the vast Pacific Ocean en route to Guatemala on a Pan Am 707 when a thought passed: “I sure hope this isn’t a one-way trip.”

It was the summer of 1969. But while the Vietnam War proceeded, an unlikely feud was brewing in Central America.

For me, it started with a middle-of-the night call from my flying partner and good friend, Ben Hall. “Chuck, I just got a call from a contact in El Salvador, and they are at war with their neighbor Honduras.” With few details, the call was an inquiry to see if any qualifi ed American P-51 pilots could help out. Before I heard much more I said, “Count me in.” I knew this was an opportunity for a really grand adventure.

Ben said our next move would be to get on an early United flight to San Francisco and meet representatives from the Salvadoran Air Force (FAS) at the Mark Hopkins Hotel.

Ben Hall was one of my greatest mentors. I started flying Mustangs when I was 19 and would trade engine work that I had learned while boat racing for fl ight time. While at San Jose State, I purchased my fi rst airplane, a P-51D, fresh from the California Air National Guard. I would never have learned how to fl y that airplane as well as I did without Ben. We kept our two airplanes in adjoining hangars at Paine Field, Washington, and fl ew around the area with great glee.

As time went on, I learned to fly formation, do aerobatics, and tail chase through the mountains and clouds of the Northwest. Ben and I started doing flight demonstrations that turned into an airshow act called “Mustang Air Shows.” For years we did those shows all over the western U.S. and Canada.

In 1969, I was 29 years old with about 3,500 hours total time including 950 in warbirds and 800 in Mustangs, so I felt confident. However, since neither Ben nor I had any combat experience, we thought it would be wise to include someone who had been in combat and could give us some training. Ben had  flown in the Army Air Corps during WW II and received some training in the concepts of dogfighting. So we placed a late-night call to our friend and fellow Mustang pilot, Bob Love.

To read more, click the link to open the PDF: The Soccer War