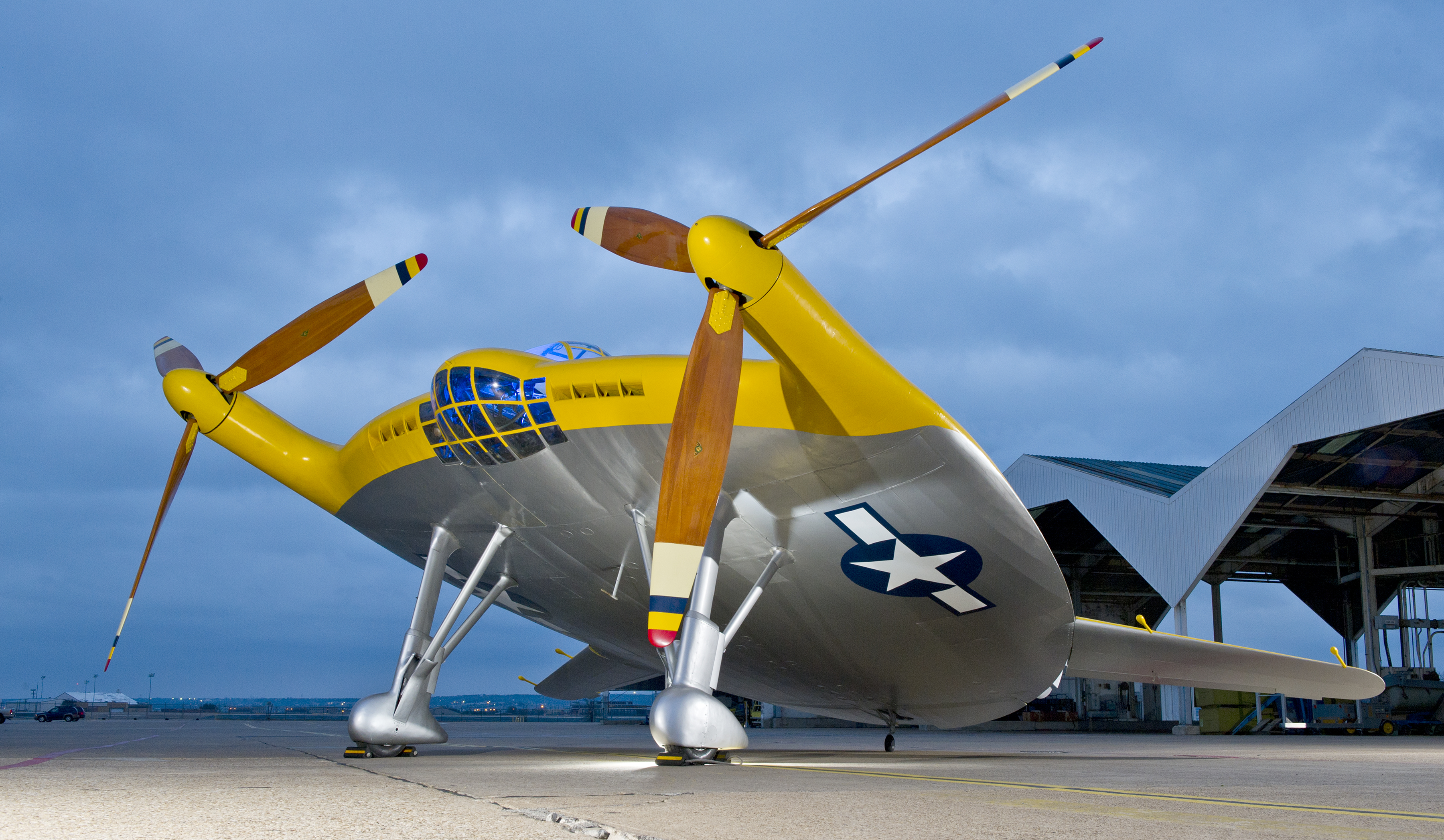 During WW II, every manufacturer was aggressively seeking ways of squeezing more performance out of aircraft. Unfortunately, virtually all of those sometimes unorthodox experimental aircraft have disappeared. This is what makes the displaying of the most unorthodox of them all, the Vought V-173 “Flying Flap Jack,” at the Frontiers of Flight Museum at Love Field in Dallas so important. The V-173 was a proof of concept machine that anticipated a larger, similarly shaped Navy fighter, the XF5U-1, which Vought completed but never flew. The V-173 flew 131 hours and helped generate huge amounts of aerodynamic data on its unique aerial configuration.

“This was an early vertical- or short-distance takeoff and landing airplane,” said Dick Atkins, a retiree who worked on the restoration. “It was designed by Vought engineer Charles Zimmerman, and some people called it the Zimmer Skimmer. It didn’t actually fly vertically, but it came close.”

The concept must have been viable because at one point during testing, the aircraft was force landed on a beach with no damage to pilot or plane.

The V-173 was built around an unconventional “all wing,” super-low aspect ratio configuration with its flat, disk-shaped body providing its lifting surface. To maintain wing lift at the slowest speed possible, Zimmerman mounted 16-foot prop-rotors at the wingtips, and designed the left prop-rotor to turn counter-clockwise (as viewed by the pilot) and the right prop-rotor to turn clockwise. This rotation is opposite to the direction of the wingtip vortices that would be crippling on such a low aspect ratio wing. The effect is to cancel the tip losses giving the wing much more lift.

The V-173 flew for the first at the Stratford, Connecticut, Vought-Sikorsky plant on November 23, 1942. Boone T. Guyton, a former naval aviator and Vought’s chief test pilot, was at the controls. While crowds watched a flight that was supposed to be secret, Guyton landed after just 13 minutes. He had determined that the pilot’s controls needed modification.

Constructed primarily of tubing, wood, and fabric, the V-173 was powered by two 80-horsepower Continental A-80 engines driving twin three-bladed propellers at opposite ends of the leading edge of its body shape. Entry to the cockpit was through a ventral hatch.

According to Atkins, the V-173 finished flight-testing in March 1947. It then stayed at the parent company’s Hartford, Connecticut, plant until 1949, when it was transferred to Naval Air Station Norfolk, Virginia, to become property of the National Air Museum, now called the National Air and Space Museum (NASM).

Atkins remembers famed museologist Paul Garber giving him a tour of the aircraft at the museum’s Silver Hill, Maryland, facility in 1962. “It was in great shape then,” he recalls. “However, when we received it in Dallas [in 2003], all the fabric was rotted and falling off.”

Atkins said that 10 Vought retirees worked on the V-173 “more or less full time. The Vought Aircraft Heritage Foundation, in association with the Vought Retiree Club, did the V-173 restoration.

Atkins and others who worked on the restoration remember that the Navy ordered the destruction of the two subsequent XF5U-1s and of all documentation relating to them.

Contrary to much that was written in later years, the V-173 was not responsible for reports of flying saucers or unidentified flying objects (UFOs). Pilot Kenneth A. Arnold is usually credited with the first widely reported UFO sighting near Mount Rainier, Washington, on June 24, 1947, but this was after the V-173 was no longer flying.