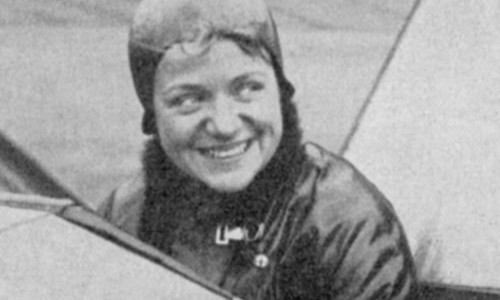 Hitler and his Luftwaffe don’t have the kind of image that would brighten a feminist’s day. Even so, if today’s public is asked to name German test pilots, the only two names likely to be uttered would be Hanna Reitsch and Melitta Schiller/von Stauffenberg. From debugging piloted buzz bombs and making heroic rescue flights to engineering dive-bombing modifications and doing pioneering flights on Stuka aircraft, these two ladies contributed mightily to the Luftwaffe’s knowledge and earned Der Führer’s gratitude.

Hanna Reitsch
Hanna Reitsch was bred for success, and she fulfilled her parents’ ambition for her in an entirely unexpected way. Born into an accomplished family, Reitsch grew up in eastern Prussia. Her father was an ophthalmologist who cultivated the classics for his three children and encouraged the second to pursue medicine. Though smitten with classical music, the precocious girl was bitten hard by the aviation bug and, for a time, envisioned herself as a flying doctor in Africa. Her father enrolled her in a medical university, but her heart led her elsewhere. While still in school, she found time to take airmail-pilot classes. Consequently, her medical studies lapsed, and she departed to pursue a life in the air. She never looked back.
Reitsch began glider training in 1932 and demonstrated exceptional ability; she shortly set a five-hour endurance record. She moved to powered aircraft the next year while continuing her passion for soaring.
One of Reitsch’s classmates in her powered-flight school was Eduard Neumann, later a senior fighter commander in World War II. He told his friend Sergei Sikorsky, “She ran circles around all of us, both in written tests and practical work.”