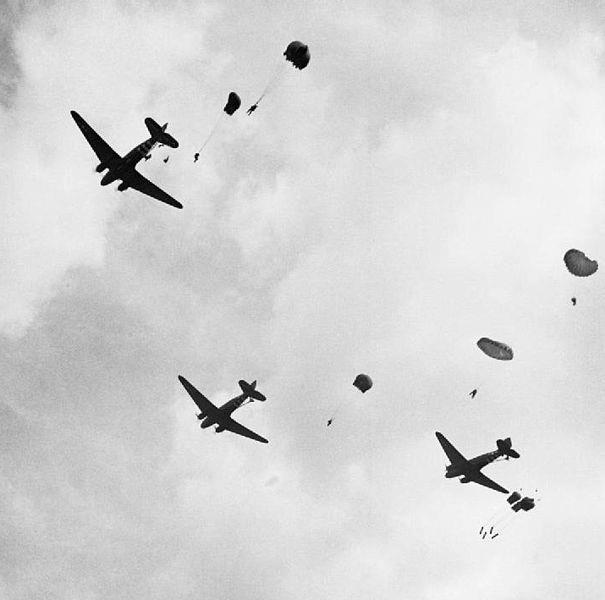 Never been done–at least not since World War II. For the first time since our nation’s heroes made history in the skies over Europe, the general public is now scheduled to see a dedicated team of skydivers jump from a formation trio of Douglas C-47s in “D-Day” invasion livery. And it’s going to happen at The Gathering of Legends and Warbirds in Topeka, Kansas this summer.

“Our team motto is ‘to remember, honor, and serve,” said Rodney Roycroft, a living historian and member of the WWII Airborne Demonstration Team (WWII ADT). “The team was founded 17 years ago, of civilian jumpers, and active and retired military personnel. In 2005, it changed complexion.” The WWII ADT obtained a World War II-vintage hangar, where they could not only store their aircraft but also house a jump school. The team grew to its present size, with 80 jumpers and 25 ground support personnel. “We honor the veterans, and we keep their history alive,” said Roycroft. “We do what we represent.” The team has jumped over Normandy, the Netherlands, and Italy in recent years to honor the veterans who fought there.

The opportunity to bring together three C-47s for the formation jump is especially exciting for the team. “In 2008, we did a two-ship drop, which we figured had not been done since the war,” said Roycroft. “We’ve dreamed of doing a three-ship drop. It is such an honor and a privilege to teach people and share with them how it looked back when it happened.” The WWII ADT is a 501(c)3 organization and educational foundation. Learn more on their web site at www.wwiiadt.org. This mass drop effort also involves the combined talent and experience base of two other jump organizations. The Liberty parachute team as well as the Heritage parachute team has signed on to provide jump qualified personnel and authentic equipment to work with the ADT, and are equally proud to be working on this joint effort. Combining the best of all talent, this event proves to be a truly spectacular once in a lifetime event to witness. The static line jumpers will exit the three authentic WWII C-47 aircraft that will be flown low level in a “Vee” formation, easily observable from the ground. This announcement is the culmination of more than 6 months of coordination between the pilots, crews, aircraft owners, and jump teams.

A very limited number of “flight positions” aboard these C-47 jump aircraft are available and will be awarded to qualified aviation media for the purposes of capturing film and video of the drops. Interested media should contact the gathering for more information and to request KNOWN MEDIA credentials.

The organizers of The Gathering of Warbirds and Legends has launched both a web site and a Facebook page that give all of the details of this incredible event. Warbird owners interested in participating in the gathering (centrally located in the heartland of America, in Topeka, Kansas, on August 1-4, 2013), can apply for positions, or “slots,” to be awarded based on their aircraft and crew credentials. A special effort has been taken to cater to the media specialists and assist them in gaining access to the planes, the crews, and in-flight positions to capture every thrilling moment.

For more information, see www.WarbirdsandLegends.org, as well as The Gathering of Warbirds and Legends page on Facebook.