To most, the Fourth of July is a montage of red-white-and-blue images: warm days, fireworks, patriotic words, barbeques and bright and hopeful celebrations. Only a few remember the men behind the day. Only a few celebrate the real “Greatest Generation.”

I’m not the first to recognize that the much-heralded WW II vets are definitely not the Greatest Generation. To be sure, they are a great generation, but you only have to look back at the Fourth of July’s roots to realize that even those who fought WW II pale beside those who originally fought for freedom and, in 1776, gave us Independence Day. And a new nation. To truly appreciate the Fourth of July, it helps if you put the day and the folks behind it into the context of the times.

By 1776, the American Colonies were far from being the string of rudimentary settlements we tend to picture in our minds. Yes, they had their crude western frontiers, but in the main they were a highly developed society with strong trade. That trade gave rise to a colonial aristocracy as fortunes and small empires were built. It is often forgotten that it was this same upper strata of society that guided the revolution, lead the armies and put their names to paper, when they told King George the 3rd to stuff it.

Think about that for a few seconds. Those leaders, mostly well educated and successful individuals, more than anyone else involved with the revolution, had a massive amount to loose. At the very least, if England had won, all who sided against the Crown would have lost every bit of personal property and wound up in jail. The more vocal and high-profile amongst them, Washington, Thomas Jefferson, the Adam’s, Alexander Hamilton, Ben Franklin and every other signer of the document that declared our independence would have, amongst huge fanfare, been gleefully hanged. England would have made a spectacle of their executions as an example to others: don’t mess with the Crown.

Don’t think for a second that the signers, and other leaders close to them, didn’t fully realize what was at stake. Every one of them could have stepped to the side, let the revolution run its course, and, at war’s end, regardless of who had won, their lives would have continued unchanged. But, they didn’t do that. They put everything they held dear, including their own lives, on the line for the principle of freedom.

The 1940’s “Greatest Generation” deserves every single bit of praise we heap upon them. However, on Wednesday, July 4th, 2012, let’s think back to the birth of our Nation and how an entire generation risked absolutely everything for an ideal. Everything! That ideal was later famously described as “… government of the people, by the people and for the people…”

Everything we are, everything we want to be, and everything we stand for is rooted in the thoughts and actions of that first generation of Americans. They, and what they created, are what made them and our Nation, great. And that, ladies and gentlemen, is what we should be celebrating on the Fourth. 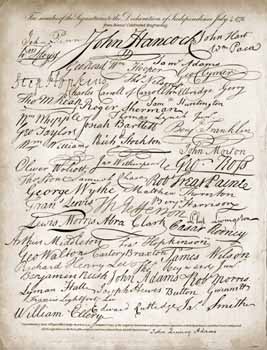